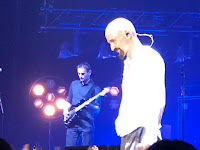 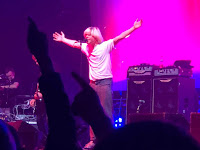 James continued their tour with The Charlatans at a packed out Manchester Arena on Saturday night. A career-spanning set saw them deliver some of their biggest hits, but, in true James fashion, tracks from their most recent album Living In Extraordinary Times as well as a few surprises from their back catalogue.

The Charlatans might not be in a place where they can play venues of this size on their own, but they know how to hold the crowd in them, particularly in what amounts to a hometown gig as they were, with James, lumped into the Madchester scene by dint of being from north of Birmingham. Tim Burgess is an energetic front man, never short of a move encouraging the crowd to join in and lose themselves in the music. Most of their big hitters are included in their set - a sprawling The Only One I Know, euphoric versions of North Country Boy, One To Another and Tellin' Stories while Weirdo makes you wonder why they didn't kick on commercially after Some Friendly as it's one of the highlights of the set. 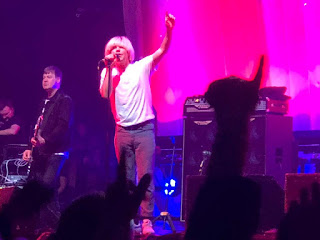 Like the headliners though, there's still a freshness to The Charlatans. Let The Good Times Be Never Ending from 2015's Modern Nature and more recently Totally Eclipsing, Different Days and Plastic Machinery from their most recent record Different Days show them to be a band not afraid to rest on their laurels. The latter in particular has a lineage to the songs of the past, but it's a dotted jagged one and they're taking themselves, and by dint of that, us, on a journey. The big uplifting keyboards are there, but there's more of a groove to them than their earlier work. Not Forgotten completes the quartet from that record with Nick McCabe from The Verve invited up to play on it.

There's also time for a heartfelt tribute to Buzzcocks' Pete Shelley who died earlier in the week with a razor sharp cover of Ever Fallen In Love where they're joined by James' Andy Diagram on trumpet. It gets the fifteen thousand or so crowd up on their feet remembering one of the pioneers of the city's music scene.

One wonders if James will ever get that accolade despite what they deliver here tonight. The absence of Living In Extraordinary Times from so many end of year lists whilst Suede's The Blue Hour sits so high even amongst those that the others are so left-field they're out of most people's vision, says a lot about how James are viewed by the rotting carcass of the music press in this country, unable to be put in the heritage box, refusing to simply recycle variations on a successful theme from two decades ago. Yet, the Arena is pretty much full to capacity, hardly an empty seat to be seen around the cavernous hall. And James go on to defy conventional wisdom on how to do this arena game.

An impressive lighting set-up heralds the multi-drum assault of Hank, the opening song of James’ set. The songs from Living In Extraordinary Times, six of them in all, feel in the main like they belong in big rooms like this. Picture Of This Place, described by Tim as “sexy” simply explodes into the life every time it reaches the chorus as Tim prowls the stage and then the ramps in front of the crowd, provocatively urging the rest of the band on.

Ring The Bells follows, sending the standing area into one heaving mass. It draws in that energy from the crowd and showers it back out around the arena, building to a furious climax as both band and audience lose themselves. A familiar drum beat is drawn out for a minute so before Tim counts in “1-2-3-4” and the place goes bananas for Sit Down. Brilliantly lop-sided, delivered with a knowing imperfection that channels the underlying message of love and it’s alright to be different that makes it such an important rallying call, its impact is delirious.

Then James take us off-piste. Refusing to be labelled a heritage band, it’s imperative to note that half the set tonight comes from the period since they reformed. Tim draws the lineage distinction between a fast and furious Heads, all metallic drums and white lights, venting fury at the white American dream of modern day Trumpageddon and Stutter, once a spindly wiry beast of 1982 vintage and now a song of show-stopping violence and ferocity that it transcends being defined as such, more an assault on the aural senses, pummelling the crowd into submission.

Never doing the obvious, Of Monsters And Heroes And Men is next. Inspired by Cormac McCarthy’s The Road, Tim takes on the role of the rambling poet, manic with vision, of the song’s lyrics. An album track like this shouldn’t by rights work in an arena but it does magically. They keep the pace down for a glorious Out To Get You, the improvised section at the end shedding new light onto the song as Saul and Jim are eyeball to eyeball, the former belieing the fact he had just spent two hours on his back dealing with vertigo.

Cognisant that they are playing to thousands Laid is next, the first verse started slowly, almost drowned out by the crowd before they let loose and the pit becomes a sea of bodies lost in the music. You’d sense any mortal band would now be on a hits-laden journey to the encore, especially given the impressive artillery that James possess that isn’t rolled out tonight, but What’s It All About takes us down a number of winding paths on our journey, testament to the sheer weight of ideas that James 2018 have in their collective head space.

Moving On is dedicated to those who have lost someone and sees Tim crowdsurfing, his face etched with a mixture of fear and exhilaration as he’s handed over people’s heads on a sea of arms. Leviathan is glorious, the stand out of the new songs and perhaps the set. Smoke is pumped out from the back of the stage as it builds into the glorious eruption of the first chorus before stopping dead before the final one, where time seems to stand still and the power of expectancy detonates the song’s final denouement. This is the best way any band can stay relevant and expel that “h” word from discussion. 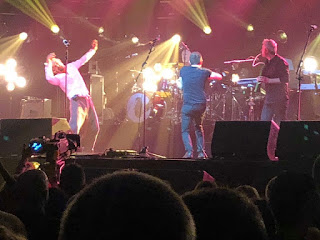 “This is what it’s all about” Tim beams at us as Nothing But Love has a sea of arms waving in unison at a song that shows James can still deliver songs of unity with a simple defining message and do it with a style and personality of their own. Attention, also from the Girl At The End Of The World album, and Sound that follow are James stretching themselves out, the extended breakdown of the former and the exhortation to leave yourself behind of the later taking the crowd on a sonic trip powered by the intense energy coming from the stage and the seats where Andy Diagram appears.

A rough, ready and revitalised Come Home concludes the main set, Tim this time out in the seats connecting with the audience while the floor is transported back nearly three decades when this song was the one to fill Manchester dancefloors.

A quick encore break later, some sound issues resolved, and the opening bars of How Was It For You ring out with Tim nowhere to be seen. He’s soon revealed to be out on the other side of the seats, stopping to sing and dance with those in the moment and swerving those with phones in hand.

Don’t Wait That Long follows and sees Chloe duetting with Tim, who’s earlier joked that she’s there to help take the high notes he can’t. As it finishes you can’t help wonder what he’s on about. Adrian’s guitar solo makes his own mark on the song too, subtly different from Larry’s original, without disturbing the balance of the song.

Two singalongs bring the night that no one wants to end to its conclusion. Many Faces is an anthem for our times, as much a song of unity and inclusion as Sit Down yet atuned to this divisive age of setting people who should be allies apart from each other. Manchester, in this place most affected by the consequences of preachers of hate and division, sings it back with a passion that brings a tear to the eye. Sometimes is more personal yet no less affecting, fifteen thousand arms held high calling come on thunder, and echoing the so simple yet all-encompassing declaration of should discovery of the chorus. They want to continue, but the archaic rules of curfew prevent any more to the dismay of both band and crowd, connected as one by the music, the words and the feeling that we're all in this together and everything will be alright in the end if we stick together.

Email ThisBlogThis!Share to TwitterShare to FacebookShare to Pinterest
Labels: James, The Charlatans