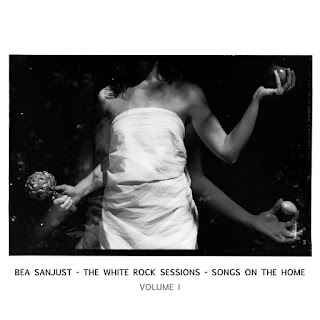 It's four years since Bea Sanjust charmed us with her debut album Larosa, one of those stunning albums that come from an out-of-the-blue recommendation and become one of your most listened records of the time and one you go back to regularly. Since then Bea has been at work with her band on a new set of songs and Songs On The Home Volume 1 (not about the coronavirus we hasten to add) is the first product of those sessions and has a similar impact to the first record.

For those that loved Bea's debut Larosa, there's plenty to fall for all over again here. Recorded over the four year period since its release, Songs On The Home Volume 1 focuses on her warm, rich emotionally charged voice dead centre around a variety of musical arrangements, over all of which she captures perfectly the essence of the song, a slight change of intonation, a dancing harmony in the background all holding the listener. At points traditional songwriting reigns, in others it almost feels like a freeform improvisation, but of the sort that only the most talented of musicians can pull off.

There's five songs on Songs On The Home and it clocks in at twenty minutes, but you feel like you've been taken on a journey. Black Fur stops about three minutes in, the final minute could almost be a completely different song, but the connection is there, a fluidity and a warmth as Bea sings "Put your love in the right place, in the hands that will keep you safe" like the wisest sagest advice.

City Girl isn't so much a song but an exercise in creating a gorgeous flowing stream of consciousness that runs like a warm bath soaking the aches and pain away. The production, crisp and clear, merely accentuates the feeling, the looseness and beauty of the song in its disregard for traditional structures and just kicking off your shoes, loosening the belt and breathing out.

Stay Young showcases the exceptional range in Bea's voice, one minute keeping time with the racing beats of the verse, the next ethereal in the chorus. The juxtaposition between the two song sections keeps it thrilling and you on edge. Lyrically it deals with the battle to keep afloat and to protect those around you - the final verse declaring "Bear in mind that the walls of a house can tumble and fall like a castle of cards and it'll be your job to keep them buoyant and bright."

That theme of holding your head up, straightening your back and taking on the world continues in Medina House, a song about fighting demons and choosing a less destructive path. Full of drama and drenched in gorgeous vocal harmonies as the song progresses, its rich melodies draw you in.

Songs On The Home however saves the very best until last. In Your Arms tells the stories of two lovers whose paths have crossed many times over their various incarnations on earth but who are finally coming together with dramatic warmth in the lyrics - "and we've waited centuries for fire to be skin and I am happy to die in your arms" - and in the way the music lifts to take the emotional whirlwind of the song to greater heights.

This is an exceptionally impressive set of five songs; worth the long four-year wait since we last heard from Bea. It's rare that such emotional intelligence and gravitas is coupled with music that makes everything feel more raw, more real, like the stories are being played out in front of you rather than having the stories told to you and a voice that takes control, demands your full attention and leads you through and assures you that everything is going to be just fine.

Bea Sanjust is on Facebook.  The EP and her debut album Larosa are available on her Bandcamp.