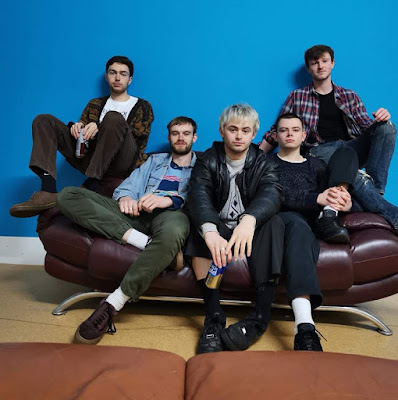 Hailed by many of our Irish friends as a hot prospect the energetic Galway based five-piece Turnstiles return with a fourth track titled I.D.C. that matches the breathtaking previous releases of Moving Forward, Wasting Away and Tantrum.


Rolling in at under two minutes the angst-ridden song is classic punk rock with frenetic, catchy guitars accompanied by fast and furious drums with a deep pulsating bass line adding substance.
This is just the type of song you want to hear during lockdown. Grabbing your attention, grabbing you by the throat and giving you a good old shake to wake you up and question everything.
During these troubled times I.D.C. (“I Don’t Care”) is a battlecry from the dissatisfied frontman Callum Mitchell venting anger and frustration. A voice for the youth not just in the West of Ireland but elsewhere too who feel they’re not heard.

“I turn on the television then I turn away, All they want is more division and a big pay day” exclaims Mitchell.

He continues, exasperated, “It’s hard to find the energy to sit up and engage when people twice as old as me seldom act their age.”

This is what makes Turnstiles stand out from many of your run of the mill bands. They’re incendiary, raw, hungry, not scared to voice an opinion and they mean what they say. Despite the song title they do care.

As with previous tracks, Colm Sweeney and Cillian Ryan continue their sonic assault of your ears while the relentless drum and bass combination of Luke Mulliez and Jake Tiernan respectively ensure there’s no let up in 1 minute 55 seconds of mayhem and madness for the masses.

For a band with a fierce reputation for explosive live shows it must be incredibly frustrating for them to be on lockdown during these crazy and uncertain times but one thing is for sure - once they return to the live circuit they’ll be equipped with an arsenal of exhilarating songs ready to woo audiences not only in Ireland but hopefully further afield too.

2020 was promising to be the year that Turnstiles enhanced their reputation further and, despite the current climate, if they continue to release songs like I.D.C. then I see no reason why they won't continue to evolve into one of the most relevant and important bands to come out of Ireland.