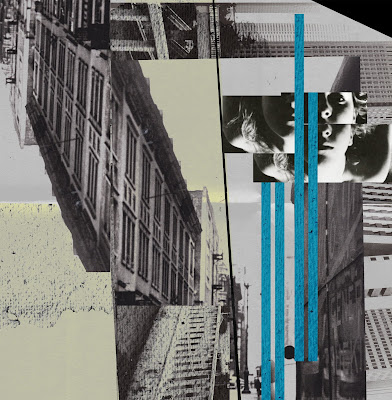 Body Of Itch is Egyptian Blue's second EP, the follow-up to last year's Collateral Damage and, fresh off the back of a successful tour with their mates The Murder Capital, it once again marks them out as a band with something to say and a sound and an anger coursing through their music that stands them out from the crowd across the EP's three tracks.

Nylon Wire opens up the EP and clocks in at just two minutes and twenty seconds. It's raw, right from the guitars that stab you repeatedly from the start and the vocals that come at you like barked orders that you must obey or face the consequences and it unsettles completely half way through when it stops dead and then builds back in. Its short sharp approach leaves you on edge, like most of the best music does and so much so often doesn't these days.

Four Is The Last Four has been in the live set for a while now and they capture the frustration of wanting to make music rather than the "we clock in, we clock out, we clock in, we clock out" day to day suffocation of having to work rather than pursuing their art. Musically it jumps around through its four and a half minutes from style to style, influence to influence and yet sounding unmistakably Egyptian Blue.

Never has taken on a more sinister meaning since its reveal in March given the coronavirus pandemic we're in the middle of. It talks of the "deception, deception" of politicians and the media outlets that serve the purpose of dictating the agenda rather than focusing on the reality of the situation. It's apolitical in the sense it doesn't talk about the individuals or parties, but the system that allows it. But it's got a sense of rebellion and fighting back to it as the final lines are a repetition of "I'm never coming down, I'm never coming down" as a sign that they're not just going to toe the line.

What Egyptian Blue have done over the course of two twelve-inch records (although the vinyl release is now delayed until later in the year) is to gather a growing band of followers drawn in by their energy and anger, both musically and lyrically, and the edge that this gives them over many of their contemporaries. The dual vocal approach makes them stand out, but their appeal and potential is far deeper-rooted than just that.