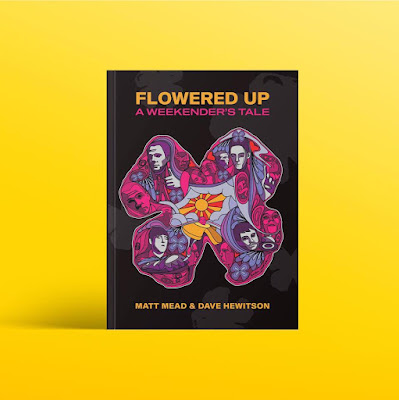 Forming in Camden in 1989, Flowered Up famously graced the music papers Melody Maker and NME, before releasing a record. This was no mean feat. Thirty years on, and fan Matt Mead has assembled a colourful visual history of the band in his new book, compiled with Dave Hewitson. Stuart Ralston has a read.

Many fans of the late 80s and early 90s music scene will recall Flowered Up. They only released the one album (A Life With Brian). Debut single It's On was a euphoric upbeat dance/rock crossover, whilst their epic Weekender single was hailed as a classic. With the music press often keen to pigeonhole, the band were labelled as the Happy Mondays of the South.

There were certainly similarities with their Northern contemporaries - the band were formed by brothers, they were working class party people and they both famously had a dancer in their ranks. Brothers Liam and Joe Maher formed the band with Andy Jackson on bass, Tim Dorney on keyboards and drummer John Tuvey. Their most celebrated member however was dancer Barry Mooncult, who joined them onstage dressed as a giant flower.

They were often joined on stage by their army of fans too and I remember listening to a live show broadcast by Radio One where presenter Mark Goodier commented at the end of their set that most of the audience were onstage with them throughout the show (an image of this gig at London's Marquee Club is captured here in the book). Listening at home, you'd never know the chaos onstage as the band rattled through their energetic set.

Flowered Up, A Weekender's Tale does exactly what it says on the tin - authors Mead and Hewitson have interviewed friends and fans and collated artefacts from their short time together. Peter Hooton, from contemporaries The Farm, and Ocean Colour Scene's Steve Cradock are amongst those interviewed for the book but the emphasis is really on the visuals.

The 120 page book presents itself as a visual anthology, mostly showcasing the band in the live environment which is probably where they were at their best. From reading the fans comments, it is clear that their gigs were more than that, they were celebrations, charting the band's rise from pub and club gigs in London in 1989 to their massive Reading Festival and Madstock appearances in 1991 and 1992. But what comes across most clearly in the book is that Flowered Up are still held in the highest affection from their fans and friends.

The book has sold out its current run of 250 copies.

Email ThisBlogThis!Share to TwitterShare to FacebookShare to Pinterest
Labels: Flowered Up