Little Sparrow returns with her new single Tears from her forthcoming as yet unannounced second album, a song with deep personal meaning from her childhood originally penned by her father. It's accompanied by a space-themed video that captures beautifully the emotion of the song.

Katie talked to us about the video and the effect she wants it to have on the listener and viewer - "I hope you enjoy the new release and it transports you into outer-space!

Tears isn't a Little Sparrow original but is a track that has very special meaning to her as he explains - "The song was actually written by my Dad Mick Ware back in 1984, about being alone up in Space. I have very fond memories of my dad writing this song and singing it to me at bedtime. I absolutely loved it even though it was sad. I spent many nights listening to it being played over and over in my Dad's home studio while he was recording it and loved singing along to it. This is Little Sparrow's version of the song"

The video was shot by Luca Rudlin from People Staring who has produced previous videos from Little Sparrow and they have a strong creative relationship, which allowed ideas to flow during the making of this video -  "He makes it very easy to bounce ideas around and makes me feel like anything is possible! We knew we wanted a space helmet and knew it had to feel like we were in Space. I wanted to bring attention to the name of the song being Tears so I wanted to incorporate the old classic make up of the mime artist, having the tear painted on my face. This added a sinister feel to the video which really excited me. We shot the video several times using different stages of make up, in a blacked out studio. Luca managed to build a structure that would hold the helmet in the same position, therefore allowing us to shoot the video repeatedly without the helmet moving. We also used several people to hold small lights up in the blacked out studio to act as stars reflecting in the helmet. It really was an exciting process trying to create that feeling of being alone in space." 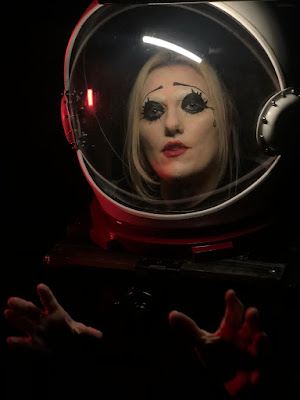 At a time where creatives are struggling more than most with the restrictions of COVID, Katie was also very keen to call out the whole team involved in the process of making Tears come to life - "I would like to thank everyone that helped in making this video happen, this includes Beverley Braisdell from Future Skills, MediaCityUK, for being the make up designer and allowing me to use the studio there. Ryan Beaumont, Bethany Frost and Molly Gregory for being my fabulous make up artists, they were great! Also Rich Williams for helping with the filming, plus everyone that patiently held a light for us"

Tears is released digitally tomorrow and a three-track CD is also available from her website featuring two of her versions of the track and her father's original.