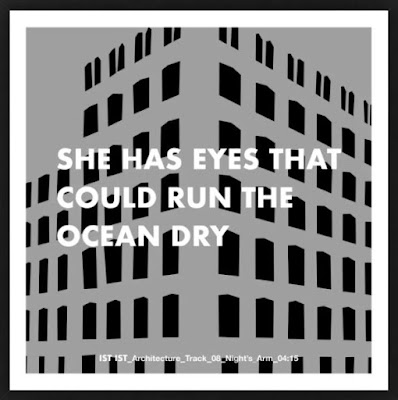 Ist Ist release Night's Arm, the eighth in their series of individual videos from their indie / vinyl top five album Architecture. The oldest of the tracks that made up their debut record, it's set to a stark black and white live performance video that heightens the sense of dramatic tension within the song.

Bassist Andy Keating told us more about the track and why it's survived so long when Ist Ist have played and discarded a couple of albums worth of material from their first shows through to the release of Architecture - "Night’s Arm was the first song we ever wrote as a band, all the way back in September 2014. We didn’t put it on ‘Architecture’ for sentimental reasons, when we were in the writing process, compiling the track listing and sussing out the flow of the album we felt like there was a space on the record for it and it would compliment the other tracks. It’s a song we’ve always enjoyed playing live too and it was great to give it its own vinyl release in August."

Night's Arm also has the honour of being the first song to be Track Of The Day twice on Even The Stars, having been named so back in August 2016 when the original version was released as a single.  They also recently released a limited edition 12" vinyl of the album version of the track accompanied by the original demo.