EP REVIEW : Asthmatic Harp - Things We Learned To Live With 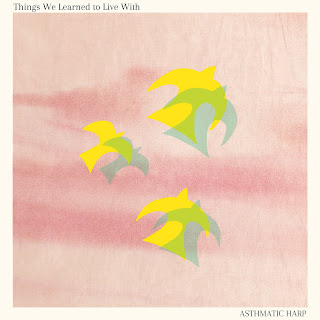 Asthmatic Harp's second EP, the follow-up to 2015's Lost Astronauts, has been five years and a couple of life moves in the making for its creator Hannah Fredsgaard-Jones. Deeply personal in lyrical content and delicately constructed musically the five songs take the listener on a journey through her creative mind and the thoughts that run through her head that leave you feeling you've trodden similar paths by the end.

Bird Of Paradise, released a single earlier this year, features a whole range of instruments, from the autoharp and clarinet to more traditional synths and acoustic guitar. But rather than working against each other, there's a discretion in the separation of them that gives Hannah's evocative voice space to take centre stage, the subtle intonation of her voice capturing the emotion of the lyrics where she asks "what is this thing called spring?" as a metaphor for the start of a romance and the questions that come with it in the second half of the song. Subtle layering of vocals add an extra level of intimacy.

To The Boats is a collaboration with London-based singer-songwriter Sophie Kilburn. Once again less is very much more, the strummed autoharp providing a delicate platform for the rich expressiveness of both Hannah and Sophie's vocals and the reminiscent looking back at the past and a hint of despair at the current being just out of reach, the final part of the song focused on the line - "I can't swim or reach you."

Limbo starts with an acoustic guitar, once again understated to the point of being so fragile that it would blow away if you breathed on it, but then takes the listener on a journey with bass clarinet, synths and pianos as Hannah takes a poem from Roma Havers and weaves it into the song and the song around the verses. It documents the falling apart of a relationship - "I wanted to hold your hand but I was so far away... And if this is a kind of ending let it be a kind one" - with a warmth and comforting arm around the shoulder. Like the rest of Things We Learned To Live With, the song finds its way under your skin, seeping into your consciousness with a disarming innocence.

Drones Over Gatwick sees Hannah asking questions about whether she belongs in the UK, written around the time the drones over the London airport closed the airways and had people unable to travel - "Is it the drones over Gatwick? Is it the constant hum in my ear? Or am I too Scandinavian? Do I not belong here?". Here the autoharp and the duet with Kid Junior makes the tension and uncertainty in the song much more above the surface than previously.

The final track Five Day Forecast is perhaps the highlight of the five. Tight claustrophobic acoustic guitar introduce the song which one again feels plagued with uncertainty and searching for a place, physically and emotionally, to call home and how the speed the world moves and the chaos that we live in hinder that process.

Things We Learned To Live With is a beautiful collection of songs that work both individually and as a collection. The lyrics are both personal yet relatable to situations you are in or have found yourself in and they're delivered without prejudice or malice, searching for peace, love and happiness. They're fragile and open, musically and lyrically, and reveal more subtlety and depth with each play. Best listened to with the rest of the world shut out, there's a reassurance and warmth across the five songs that people would do well to consider as they live their lives.

Our interview with Hannah from earlier this year can be found here.