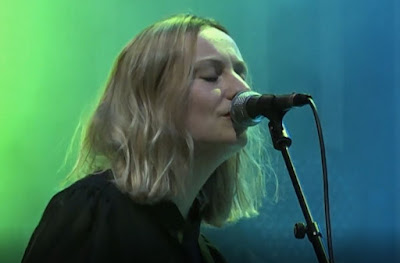 It's been quite a year for Lanterns On The Lake. Their fourth album Spook The Herd earned them a Mercury Prize nomination to go with universally positive reviews for their strongest record to date. Touring plans had to be put on hold because of lockdown and tonight's show, initially planned to be a socially distanced event in the stunning surroundings of Gateshead's Sage, had to be changed to a livestream playing Spook The Herd in full.

In a parallel universe somewhere, Lanterns On The Lake should be bathing in adulation for their finest set of songs to date, filling venues like this most impressive of stages. As when they played here in 2016 with the Royal Northern Sinfonia, The Sage is a perfect place for the dynamic atmospherics of Lanterns On The Lake.

Live, the album feels more experimental yet no less pointed or targeted as a result. Subtle nuances in Oli Ketteringham's drums, Paul Gregory's unique style of guitar playing (on Baddies, Swimming Lessons and A Fitting End in particular) and Angela Chan's flourishes on violin make this performance more than just a faithful recreation of the record, but it's creating light and shade and digging under the skin rather than a radical reinvention. This is a good thing as Spook The Herd on record feels like they've finally captured in the studio the magic of their live performances and distilled it into something that strikes the balance between accessibility to a wider audience and their natural musical instincts.

Two-thirds of the set sees Hazel Wilde sat at the piano, an unusual lead instrument for a five-piece band, but then Lanterns On The Lake have never been a usual band. At moments it's the only instrument you can hear accompanying her voice as she sings of the destructive nature of the world on Blue Screen Beams (dedicated to "our friends in America") and Baddies with a contained anger and frustration or delves into more personal matters around death and supporting others in need on Every Atom, Secrets & Medicine and This Is Not A Drill.

And whilst the subject matter might be dark, there's a positivity that shines through in the delivery and moments in songs like when everything drops out in Blue Screen Beams - "do you have hope and I said I don't, but I do, I do, course I do" - or the call to arms to change your own situation on Before They Excavate which builds, drops and builds back with a perfect mastery of mood to ensure maximum impact. Those contrasts feel even starker watching them perform this in a dark room on a screen than on vinyl or streaming.

The unassuming modest nature of the band comes across, Hazel talks about it being scary playing these songs in the big hall at one point and at another jokes that being in an empty room makes it feel like one of their early gigs with just a sound engineer and a friend at the back. She dedicates Secrets & Medicine to anybody who's lost someone recently and it feels heartbreakingly poignant sat at home as are the final moments of This Is Not A Drill as Hazel sings "I never thought I'd be the one to be saving you".

The video and audio are the most impressive we've seen and heard from a live stream too, seamlessly mixing shots of all five of them and capturing each of them at moments they are central to the song being played. It's a shame that it's not possible to rewatch the show, but hopefully that will mean there are plans for some form of official release to cement the long overdue recognition that one of the country's finest bands have received in 2020.

Spook The Herd is out now on vinyl, CD and download via Bella Union and can be ordered via their web store. Our review of the album can be found here.

They release The Realist EP on December 11 featuring outtakes from the recording sessions for Spook The Herd. It can be pre-ordered here.