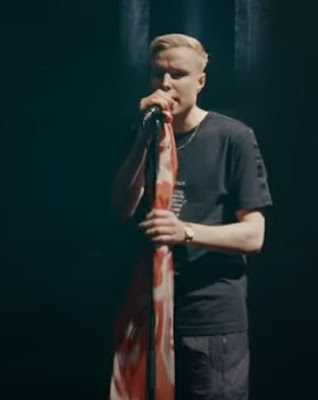 Watching the latest series of Jools Holland during these troubled times unearthed a gem for many in terms of Dublin artist For Those I Love.

The link to the musician David Balfe, personally, was discovered courtesy of researching the critically acclaimed Irish band Burnt Out whose songs had been played, and continue to be played, at the beginning of The Murder Capital shows.

Friend, bandmate and poet Paul Curran sadly passed away in 2018 and digging deeper into the profile of Balfe we uncovered the euphoric dance rave / gritty real life spoken word outbursts that is For Those I Love and an album that was available on a couple of platforms for a short time. An album of pure raw emotion encapsulating friendship, keeping those that you love close to you, never letting go of those you love and the wider issues of society in Dublin and it’s surrounding areas and the problems that exist, that never go away.

In a fitting finale to the latest series of Jools Holland, the song I Have A Love, dedicated to the genius that was Paul Curran, showed how music, art, brings us closer together. An emotive, powerful performance that was pretty astonishing more so considering it was Balfe’s first live television performance.

Having been very privileged to have met and conversed with Balfe it’s obvious he’s a humble, shy, unassuming character who first and foremost puts those he loves at the top of his priorities. Social media isn’t his thing really so laying himself bare by means of his art is something that should be respected, applauded and appreciated. Meeting him that one and only time he was surrounded by his friends at a gig of more of his friends playing their biggest ever hometown show at a sold out Vicar Street in Dublin. Friends sticking together through thick and thin celebrating their lives and the lives of those now sadly gone. He was humble but very engaging and genuinely surprised that I’d recognised him and heard his music and that it had managed to make a mark across the Irish Sea. A deep rooted connection based on the music and the art enhanced further by this televised performance which epitomises everything about the man and For Those I Love.

David Balfe delivers the performance of his life and it’s not for the faint hearted. It’s brutal but it’s also beautiful. The words, the music, the pure raw emotion that we witnessed should really have come with trigger warnings.

Balfe stands there under the spotlight in a darkened room, in a dark place, with a flag draped over the microphone his emotional crutch. He looks vulnerable, fragile, determined and emotional. He’s wearing a t-shirt with the names of his closest friends on the front. The eerie keys that open the song add to the anticipation and the despair in the air. Time’s a great healer they say but even from the opening words we know the pain is still there. “I have a love and it NEVER fades” Balfe defiantly proclaims before launching into the hard hitting spoken word of real life complete with Dublin lilt that you associate with the late, great, Paul Curran and current stand out performer Unorthodox Coolock.

From the 2x2 punk stage, to a warehouse rave, with a bloke we met on the way, dancing til day”

The tone of Balfe’s voice altering with that evident emotion he’s feeling. Holding his hands together, gesticulating, getting more twitchy with the pain etched in his face for all to see. This isn’t fake. This is real life and he means every word when he roars “I love you beyond life”.

Cue video footage behind him - October 2017 - a happy go lucky Paul and memories that can never be taken away - “For me best mate Paul Curran, Rest In Peace Brother, I miss you every day”.

A beautiful dedication but equally devastating too but from the depths of despair there’s an upbeat boundless energy as the beat gets faster lifting you up, usurping the desolation. A song deeply personal to Balfe and his friends but shared to a wider audience it hits a raw nerve where many of us have been. It takes a unique and special talent to make an outsider grasp and relate to it. A cathartic performance which no doubt will help others with their own pain that they feel.

Balfe continues “surrounded by those you know, crying for your words and your soul, and that final loss of your glimmer of hope, that we heard every time that you spoke” before mournfully reflecting “now we send you off in funeral cloths”

Through teary eyes and a broken, heavy heart there’s still time to remember the good times. Paul’s infectious laugh clearly audible on the video footage and samples, geeing up the courageous Balfe to tell us “But the love that remains, would shape the memory that stays, even now I can see your face, when those chords are a played, your arm around me shoulder in teenage embrace”.

Reminiscing about playing early workings of this song “you smiled as you sat next to me” as further footage shows a gang of mates, dreamers, in a car living a care free life with everything in front of them.

The piano melody, and layers that surround it, accompanied by the heart thumping beat, ebb and flow the emotions of the song to a euphoric level as Balfe pokes himself in the chest defiantly telling us, his friends, and Paul, that “I have a love and it will never fade....and either will you Paul” as more video footage appears before Balfe unties the flag from the microphone and holds it aloft. Arms aloft, in celebration yet with an icy stare of a man who has just given his all and there’s nothing more left to give. It’s the flag of Shelbourne Football Club. More importantly it’s a Coolock Reds flag - a flag that represents the value, the belief and the history of Balfe and his friends both here now and those gone....but never forgotten.

Remember the name David Balfe and For Those I Love. There’s a lot more to come from a man who wears his heart on his sleeve. This astonishing performance must rank as one of the greatest performances aired on Jools Holland. Thank you for the music in these extraordinary times.

Email ThisBlogThis!Share to TwitterShare to FacebookShare to Pinterest
Labels: For Those I Love