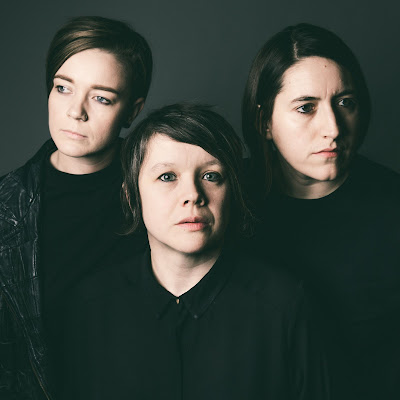 LIINES today release their new single Sorry and couple it with last year's On And On as part of a limited 7" single. With new member Anna Donigan joining earlier this year and recent appearances on Gorilla TV and radio play for the single, it feels that LIINES' star is continuing to ascend despite the constraints of lockdown. We caught up with Zoe and Leila for a chat about the single and what's been going on over the past few months.

Tell us a bit about your new single Sorry. It had been in your live set for a while before lockdown. Did it feel like a natural follow up to On And On?

Zoe: I think it's a nice contrast to On and On and has been a firm favourite live so it made sense to release it as a single. It's had an overwhelming response from fans and it's had so much airplay already so it was definitely the right decision.

Leila: It’s a song we wanted to get out much sooner as we actually recorded it at the same time as On and On, back when Tamsin was in the band. But the busyness of touring and festivals last year meant we didn’t around to releasing it before the end of 2019. We had it lined up for a May 2020 release and our biggest headline tour to date lined-up… and, well, you know the rest.

There’s some striking artwork accompanying the blue and black 7” single. Could you tell us a bit more about that?

Zoe: We wanted to carry on with the geometric uniform of our artwork. This is actually the ceiling of an incredible art gallery in Berlin that I took which I sent to Leila who then transformed it into this and she has created a masterpiece. We dipped our gothic toes into the colour pool and added splashes of blue (which nicely accompany the blue vinyl) and this has then gone onto create a beautiful t-shirt design (available here if you fancy a look)

You recently appeared on Gorilla TV which is backed by the likes of Tim Burgess and Dave Haslam and were Single Of The Week on XS as well as being played by John Kennedy. Does it feel like, despite lockdown, there’s still a growing momentum?

Zoe: Well we had this single ready to go along with a tour earlier this year then we went into lockdown. It's been a thoroughly depressing time for the music industry and I know myself that I have felt a massive sense of loss and grief. So having this in our back pocket has been really good and has kept the band alive and the response has been overwhelming.

Leila: We were pretty nervous to start approaching people again after so long. But actually, it’s been a massive boost to us. It was ace that the Gorilla TV gig could align with our release, we’re really grateful to Dave Haslam and Tim Burgess for having us on that. It felt like home again.

The response from DJs and people generally has been incredible too. It’s hard after not playing and interacting with people to remember what people think about your music, so we’ve been really humbled by people’s reaction to it. Just makes us want to get back recording ASAP. And getting back on the road, of course.

And that obviously leads into a second album. How badly has working on that been derailed, given you have done most of your recording in London previously, or can we expect it to happen soon?

Zoe: We were booked to record the album in April and who knows when this can happen now but we will do it. We have the songs, we have new songs and we are really excited to share them.

Leila: We were so excited to be working with our producer, Paul Tipler, again. It’s been a devastating time for people like him too and we’re gutted we can’t just drive to London and spend a week recording what’s been in our heads for the best part of two years. Like Zoe says, we’ll get there and it’ll be so special when we finally get to do it.

You have a new member. Anna has joined after leaving Pins. Were you friends before and how did she end up replacing Tamsin?

Leila: Tamsin left at the end of last year because she wanted to pursue her own music – there just weren’t enough hours in the day to do it all! Ironically, 2020 hits! But we had the best and most memorable experiences with Tamsin and we’re really excited for comes for her and her new solo project Vice Vera.

We were thrilled to meet Anna. We obviously knew Anna’s work from PINS and more recently playing with Honeyblood. Anna was tagged in a Facebook post when we advertised for a bass player. Once we went for a beer we knew it felt good! We managed a few times playing together when we were rehearsing for tour – even a photo shoot! – and it all felt great. Anna is the perfect fit for LIINES. We’re so pleased we’ve had a part-live gig experience playing on Gorilla TV, but we cannot wait for that first LIINES gig to properly welcome Anna to the band.

Have you had much opportunity to write new material and rehearse during lockdown?

Zoe: We have only gotten together for Gorilla TV and a John Kennedy Isolation special – which goes out this Friday on Radio X, along with an interview which was ace. We really can't thank him enough for all his support.

I have written quite a few songs which are yet to be bashed out with Leila but they're very promising and I feel really excited about hearing them with bass and drums. We’ve also got a few of the tracks we’ve been playing live for a while, two of which will be on the Radio X session. So we’ve pretty much got an album sat there waiting.

Zoe did some live streams back in the first lockdown. Have you considered full band live streams or socially distanced shows or do you feel that would detract from the LIINES live experience?

Zoe: It's not something we want to do (at the moment) purely because we love the live experience so much. I say at the moment because we may change our mind but for now we've had some really wonderful opportunities recently which has given us a boost and they feel really special that we don't just want to knock out living room sessions – it just doesn't feel very us. Being back in the Deaf Institute was something else, so it would have to be something special. Watch this space.