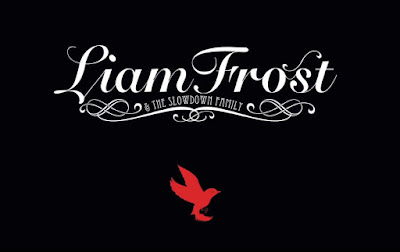 In celebration of the vinyl reissue of his debut album Show Me How The Spectres Dance, Liam Frost and friends performed an in-the-round live performance of the album plus a bonus track at his hometown venue Bury Met.

Cards out on the table. Show Me How The Spectres Dance is one of my favourite records of all time, a record that it felt like I was at the birth of - their four-night residency at The Water Rats in London at the start of 2006 and the build to a glorious RNCM headline at Christmas bookending a year catching them at every opportunity. The album came in the middle, perfectly imperfect, full of post-millennial tension, richly expressed stories of love, loss and that melancholy sense of regret that Northern English songwriters seem to capture so well. It talked of real life experiences, relatable with an open-hearted honesty that was simple in expression and delivered with a voice that felt like the warmest of comfort blankets.

Record labels and a shifting musical landscape towards image over substance meant that the album never got the recognition it so richly deserved. Yet in the hearts and minds of those fortunate enough to cross its path, it's left an indelible memory, shown in the outpouring of love when it featured recently on Tim Burgess's listening party. Liam's continued to make music - 2008's We Ain't Got No Money Honey But We Got Rain and 2018's The Latchkey Kid both maintaining the high watermark set by the debut - and play too infrequent mainly solo shows. Stripped down the songs retained their beauty, cutting even closer to the bone at times.

For this celebration, with The Slowdown Family scattered across the UK and beyond Liam brought together a group of friends - Stuart McCallum (Cinematic Orchestra), Callum Williams (The Latchkey Kids), Pete Mitchell (Mandolin Pete in The Slowdown Family and now Paul Heaton's drummer) and Christian Madden (Tokolosh) on keyboards - to give the album the full treatment. It's recorded in the round in the stunning yet understated setting of The Met's Derby Hall.

The show runs through the album in the order of the record, starting with The City Is At Standstill. The energy is immediate, from the vocal harmonies, the thrilling rush in the build to the chorus, the simple repetition in the drums and the keyboard flourishes. Far from a live recorded performance being sterile as has been the case with many during lockdown, this is vibrant and exciting, capturing but not carbon-copying the energy of the original. As it finishes Liam lets a little smile cross his face.

If Tonight We Could Only Sleep is tense, fraught with the uncertainty of building relationships in an uncertain world. Where the band added the dynamic to The City Is At Standstill, here they flesh out the detail and subtleties of the song.

She Painted Pictures, Liam's debut single, has a much harder edge here, a tale of resentment to a lover who had done him wrong - "And all of your colours still light my dreams, and all of your secrets still haunt me, and all of our stories, the webs unwound. This time I draw the line, this end will define us all" - delivered with a venom that still runs deep all this time later, both vocally and visually. That such venom is wrapped up in such an uplifting song provides one of the contrasts that run through Spectres.

The Mourners Of St Paul's, Channel 4 Planet Sound's single of the year in 2006, is the album's centrepoint. Devastatingly open about the loss of his father and brother at a young age, it strikes a chord with anyone who's suffered that and struggled to cope with the aftermath. Played solo it silences a room and has many in tears. Us included.

The full band version has the same impact but gets there by a very different route, building from a sparse solo electric guitar to an explosion of five instruments and the exhortation to "let the funeral start" as the devastation is that of everything caving in around you and the powerless resignation to the inability to process what has happened and the search for escape. The line "I'm twelve years older, I can't stay sober, and there's a bluebird in my heart that's caged and it can't sing, so fill your bloodlines up with bourbon kid and this won't sting" manages somehow to be poetic and vivid when describing a sense of utter helplessness. We could write a thesis on why we think this is one of the greatest songs ever written, but we'll save that for another time.

This Is Love is just Liam and an acoustic guitar, his accented vocal added depth and gravitas to the words he's singing. While musically it acts as a counterpoint to She Painted Pictures and The Mourners Of St Paul's, it's every bit as personal and raw as the latter, touching on unspoken childhood memories of "unspeakable lows" and putting a protective arm round other characters in the song that are alluded to rather than described in detail. The effect they have on Liam can still be seen in his facial expression, eyes closed. The song might be a decade and a half old, the memories older, but the effect is still as devastating.

The lyrical content doesn't get any easier as Is This Love tells of the aftermath of his brother's death and betrayal ("I'm choking on your cluttered alibis") and attempting to vanish the memories by "stamping out the fire" and revealing a hidden secret. Musically understated, the musicians are essential to the song even in the minimalist way the drums and keys provide a sparse undertone that allows the focus on the words and the intensity of the emotion behind them.

Paperboats has an almost waltz-like quality which complements the poetic quality of the lyrics full of references to the sea as a metaphor for the trials and tribulations of life - tides closing in, ships sailing, lying on the rocks. It takes the viewer on a journey, stopping dead and coming back in with just harmonies before the instruments kick back in. The final line "down to the sea, as it washed over me I let go" feels like the final escape and submission to fate.

We have memories of unamped performances of Roadsigns And Redlights with just Liam and Pete and that's recreated here, just acoustic guitar and violin, albeit plugged in, so sparse at times to be almost not there at all. Once again contemplative, talk of flowers on graves and demands to take the flowers away, there's a real darkness that's accentuated by the absence of the band.

The chorus of Shall We Dance offers optimism among the bleakness of what's gone on before it. The first verse doesn't pull punches though - "Will this cold wind ever cease, will I make it through this year?" and "all these ghosts I've chased across this land won't leave my troubled mind" - but the question of the title offers hope of salvation as the song progresses. The band both manage to capture the energy of the original and add their own twist to it.

Try Try Try concludes the record, the only song that could possibly end it. We have a theory that the track listing of an album can be just as important as the songs themselves. Try Try Try picks up on what's gone before, referencing lines from other songs directly, reflecting on the tragedies that were revealed. And it provides the ultimate solution as the final line - "love is the only certainty and it's here in front of you."

There's an extra bonus track in the encore which has a strange three minute gap before it starts that obviously works at a live show but not sat on a sofa in front of a TV screen. At First It Felt Like Darkness was only written towards the end of the recording session for the album and ended up as a b-side to The Mourners Of St Paul's and has the band in full flight, louder and letting go more so than they had previously, setting the pulses racing, the heart beating faster and capturing the imperfect perfection that The Slowdown Family took with them wherever they went.

When Liam recently did the listening party with Tim Burgess, Dan of Speedy Wunderground captured perfectly why Show Me How The Spectres Dance was such an important record at the time it was released - "I remember how grown up this album seemed to sound compared to all the other stuff coming out of Manchester at the time. And how impressed I was you forming such beauty from such sad experiences - it was inspirational for me, having been through similar stuff." In a world different to the one we live in now where men weren't encouraged to share their feelings, when the stigma of doing so was to be branded weak and pathetic, this was one laying everything bare.

Liam defied characterisation, it was difficult to imagine such tender, evocative words about the darkest of experiences and thoughts coming from a young man who seemed hellbent, with his band mates, on living life to the max and burning himself out, as the Slowdown Family did as they toured the album. Whether it be that, the industry fixation with image or a major label being unable to fit it in a box and market it, Show Me How The Spectres Dance escaped the acclaim it deserved except to those that were fortunate enough to cross its path. Fourteen years on, it still feels as timeless and important as ever, a reminder that when bad times happen, there is a path through if you face up to what's happened and search out love from amongst the excrement. It deserves to sit up there with the finest records ever to come out of our city - and we'll never tire of telling people that.

Liam Frost can be found on Facebook, Soundcloud, Youtube and Twitter. His website can be found here.
His new project The Fountainhead is on Facebook, Twitter and Instagram.
Show Me How The Spectres Dance is released on out now on translucent blue vinyl on November 6. Signed copies can be preordered from Piccadilly Records, Rough Trade and selected other indie retailers.
We recently spoke to Liam about Show Me How The Spectres Dance, this live show and his new project The Fountainhead.  Read that interview here.
A Love Letter From Bury is available until the end of the month on Veeps. Tickets are available here
________________________________
Follow Even The Stars on Twitter at @eventhestarsuk and like our Facebook page for all the latest updates
Posted by Even The Stars at 01:30