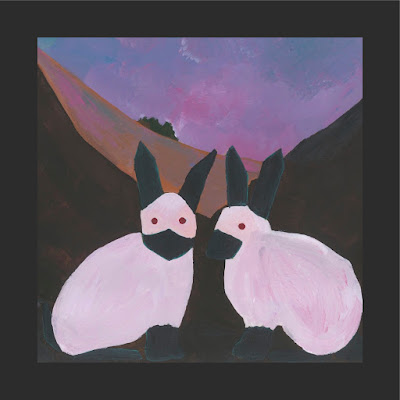 Nine singles into their existence, Gold Baby have taken the plunge with their debut EP Rabbits. Across four tracks they demonstrate a knack of combining instant hooks, changes of pace and lyrics that will fascinate, confuse and make you smile often within the same line.

The EP opens up with Bodie, named after a ghost town in America, used as an analogy for the often-explored subject of a relationship break-up.  It poses the question that the one going through the heartache at the end often asks themselves - of whether the whole was a deception or a trick of the mind "Is there anyone here or was it just me?" before concluding "It's the loneliest place I've ever known, I was promised gold." As it proceeds, the music builds, irregularly in parts, accentuating the feeling of uncertainty in the words as it builds to a chaotic end.

It's an approach that serves Gold Baby well across the EP. Always in control yet teetering on the edge of veering off to the side, it's even more pronounced on second track 2041, in which the slow beat of military-style drums appear out of a frenzied chorus before moving into a section where gorgeous vocal harmonies and a softer melody take over. Somehow the dozen or so ideas that could create a song in their own right fit together coherently and really grab the attention.

Betty has lines about kicking her mother in the head, eating lipstick and bulldozing houses, none of which in a normal world would feel like natural activities but in the story-telling world of Siân, Sara and Scott, it seems like a normal sequence of events, such is the fascinating tales that are built across these songs, held together by music that moves from following the words to leading them.

Captain Dorego's lyrics almost feel like a recording of a set of random thoughts about searching for something in life yet not really knowing what the end point is but finding joy in random points along that journey. There's an innocence to it, present in the three previous tracks but more prevalent here, that makes you warm to it because of its disarming nature, and the way in which it is delivered. Siân's vocals and words betray uncertainty and confusion, but also an optimistic spirit that the music takes its lead from and catches you off-guard.

Rabbits is a fascinating set of four very different songs that paint a picture of how difficult and confusing life can be and how escapism can be achieved through letting your mind wander, never settling for the dull and ordinary. They're delivered with humour, humility and honesty and provide a fascinating antidote to formulaic and unadventurous recycling of the musical past.