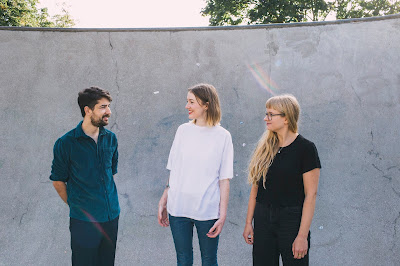 Last Friday Gold Baby released their debut EP Rabbits after a series of nine singles that preceded it. We caught up with Siân, Sara and Scott for a chat about how the band came together, their ways of working, the four tracks from the EP and their hopes to be able to get out on the road once we come out of lockdown.

Hi. Could you introduce Gold Baby please and tell us a little about how you got together?

Siân: I play guitar and sing for Gold Baby, Scott is our drummer and Sara plays bass. After performing as a solo artist for years up North, I moved to London with a handful of new songs and a note in my notebook that said ‘Gold Baby - possible band name?’ and made a decision pretty quickly to take a break from playing solo and start a band. The slow bit was finding each other - I knew no-one in London when I moved, but we got there in the end!

What inspires you to write and what made you become musicians?

Sara: I got into a lot of Grunge and Swedish pop as a teenager, and listening to it didn’t feel like it was enough, so I started learning to play, and it’s been something I do ever since then.

Scott: I got into heavy music as a teenager after stealing my brothers CD’s and hearing people like Lars Ulrich playing loudly made me want to play the drums. Got my first drum kit when I was 15 and just loved playing in bands from then on.

Siân: I loved singing as a kid, even though I was really rubbish according to my older sisters. I remembered recently that my first solo performance was singing that acapella little boy’s solo in the Christmas carol Once In Royal David’s City when I was about 12, which was very cool. Shortly after some friends burned me some CD’s with a load of classic rock and punk and my mind was blown - four friends and I started a band even though none of us could play our instruments. I started writing as a teenager when I could barely play, as a way to cope with a lot of stuff at home that was falling apart around me. Now it just feels like an inch I have to scratch, a mode of catharsis that is kinda fused with my brain.

How does your songwriting process work – do you write together as a band or does one of you bring songs to the others?

Scott: Sian Comes to us with a fairly well formed song idea and we just hammer it out in the rehearsal space by going over it again and again.

Siân: yeah, I used to do a lot of talking and explaining, but I’ve learned that we work best when we get really locked into each and just have a lot of fun with the songs.

You’d released nine singles before this debut EP. What was behind the decision to wait so long to produce a bigger body of work (other than the last twelve month’s obvious constraints?)

Siân: Wow 9, really! It wasn’t exactly intentional to rack up that many, but I’m really glad we did it that way, because it’s allowed us to play around a lot with the direction of the band and to really find our feet. Now it feels like we really know ourselves and we’re all desperate to get an album recorded.

Scott: It’s also just easier for a small band to keep putting out singles as bigger releases can get expensive. However, the plan it to get an album together later in the year and put it out physically.

Could you tell us a little about the four songs on the EP please?

Siân: Haa, that makes sense - I’d been listening to a lot of Phil Collins and I was kinda heartbroken over a relationship in my life when I was writing this. Bodie is a ghost town in America, and this one to me feels like an exorcism.

Scott: The weirder one.

Siân: I read this article about how women are statistically way less likely to speak to aliens, if they had the opportunity. It got me thinking about the many quiet forces at play that affect a person’s confidence.

Scott: The one with lots of energy.

Siân: This one might be my favourite to play live - and I know that because we got the chance a whole once! It was fresh out of the bag at our last show we did before lockdown. I’d liked it a little when I took it to the practise room, but Scott brought so much energy to the track and added that big half time bit that crashes into a really melodramatic end - it’s a lot of fun on stage.

Siân: Captain Dorego is about feeling overwhelmed and not knowing what you want. I wrote it after reading The Old Man & The Sea and feeling like I wanted to sail off in a little boat from my life and all my responsibilities. Little did I know life was about to get much simpler….

Captain Dorego’s video made us smile. How did you come up with the idea for it and how easy was it to convince your friends to join in?

Sara: Even Scott and I were a bit unsure if we wanted to be in it, I think (Scott, feel free to correct me on this, haha). Dancing is definitely not something I am good at, or do often, but it turned out to be a fun day.

Scott: Yeah I enjoy a dance but usually when its dark and no-one can see so I felt a bit awkward being on video. That is why I’m always to the edge of shot letting our more adventurous dancing pals take centre stage.

Siân: So I basically forced/convinced everyone we were going to have loads of fun learning a really simple dance together… this is a good insight into our band in general haha - ‘it’ll be great, trust me!’. Moin Hussain directed the video and he came up with the concept after chatting with me about the meaning of the song, then we developed it together as I used YouTube to learn how to choreograph a line dance - one of the weirder new lockdown hobbies! Then the four of us (the band and Moin) convinced anyone we thought might be up for it to give up their Sunday to dance with us and it ended up being a really weird fun Sunday. I definitely told everyone the dance was going to be simpler than it actually was though…

The artwork is intriguing with the two rabbits on the front. Is there a story behind that?

Siân: My nana made the artwork for nearly all of the other Gold Baby releases. For this one I had a clear idea of what I wanted - I had the California hills in mind, and those are Californian Rabbits with the little boots on.

Anyway rather than give my Nana orders, we kind of did the other way round - she gave me painting lessons over the phone

Help Musicians are credited with assisting with the EP. What was their involvement in the record?

Siân: We successfully applied for their Do It Different Fund. They are amazing and have given us advice on everything from promoting the EP to physio advice!

With lockdown lifting, what plans to do have to go out and promote the record?

Sara: I’d love to be able to get back to gigging again, and hopefully put together a UK tour.

Scott: Playing shows is the ideal way to promote a new release, so it’s been a bit of a shame we haven’t been able to do that but fingers crossed we can make up for it later in the year. Sian has been doing some great work on our behalf doing the solo shows online which has been cool to watch.

How would describe Gold Baby to someone who had never heard your music before?

Scott: Catchy guitar pop songs with a bit of a story feel to them I guess is an a good way to explain it.