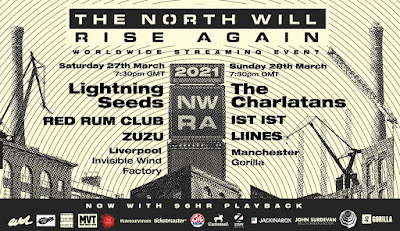 It's very strange to see the familiar stage at Gorilla, the illuminated bar and toilet signs stage left, and not be in the middle of it, crammed tightly together, sweat dripping down from the brow in this converted railway arch that has for the last decade made itself such a fixture in the Manchester music scene. But the fact we've got three bands in here, streaming into our homes, gives us hope that normality is not too far away.

LIINES' performance at The North Will Rise Again is the debut gig performance of new member Anna Donigan, who the sharp-eyed amongst you will recognise as transferring from PINS. She's a natural fit with founder members Zoe and Leila right from the start though, providing the piercing bass lines that cut through Leila's drums that drive these three minute assaults on the aural senses and Zoe's unmistakeable voice, that both channels many of her heroes but which has become a real distinguishing factor that makes LIINES stand out on the Manchester scene and further afield. 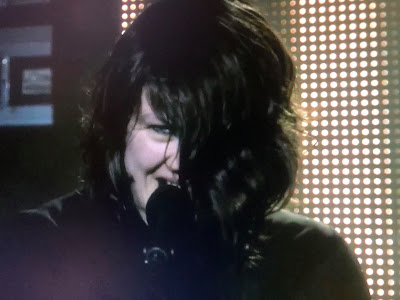 They start off with two songs from their second album, which they were scheduled to go in and record as lockdown hit last year. Keep On Going and Go both possess the energy and dynamics that characterised their debut Stop / Start, short, sharp bursts that set the pulses racing from the start, momentum building and building till the brakes get hit. Older songs like Cold and Disappear benefit from familiarity, but the magic of LIINES is that the power of the performance is all-consuming, the rawness is what keeps them fresh and exciting, even through a television screen rather than standing six feet away from them in a dark room.

LIINES played Keep On Going, Go, On And On, Cold, Disappear, Never Wanted This, Shallow, Sorry, Never There and Not Afraid.

A year on from the release of their multiple chart top five album Architecture, Ist Ist get to play tracks from it for the first time since release in the room where they've played two sold-out shows of their own as their under-the-radar rise through the Manchester venues took shape. Their appearance on this bill signals that they may be on the verge of moving from being seen as outsiders to more central in the eye line of music fans and the industry. 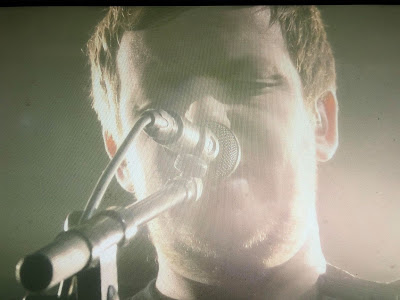 Their set takes tracks from Architecture - compelling album opener Wolves and its brooding intensity, heightened by the close-ups of front man Adam lost in his own world and words, driving singles Silence and You're Mine steeped in dark Mancunian melancholy with optimism poking through the cracks and the more melodic battered and bruised romanticism of set-closer Black - with three new songs from their forthcoming second album. Extreme Greed, Fat Cats Drown In Milk and It Stops Where It Starts are a linear progression, more adventurous in scope without ditching the blueprint, clinical without losing the passion and power. For a band that's endured many lazy comparisons there's no one making this music sound so of this time.

Ist Ist played Wolves, Extreme Greed, Silence, Night's Arm, Fat Cats Drown In Milk, You're Mine, It Stops Where It Starts and Black.

Tonight's headliners The Charlatans are in their fourth decade as a band now and their set covers large parts of that career in their just over an hour set from set-opener Then and You're Not Very Well from their debut Some Friendly to Plastic Machinery and the title track from their last record 2018's Different Days.

Within that they mix some of their best known hits - Just When You're Thinkin' Things Over, North Country Boy, Weirdo, Can't Get Out Of Bed and One To Another - with a series of lesser-known tracks that show that they're not just a singles band and why they've lasted so long, growing with their audience. 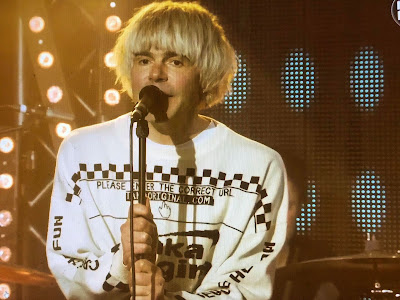 Whilst The Charlatans have always been very much a unit musically, visually it's Tim that draws you in as he loses himself completely in what his band mates are creating. He describes Come Home Baby as "a gospel song for the internet generation" and at the end of You're Not Very Well stands and tells the others he's just had a flashback to 1989. By the start of One To Another, he's forgotten there's no crowd in front of him, lost in the moment, raising in his hands in his traditional urging to the audience to lose themselves in the music. And whilst nothing can replicate being in that room, The North Will Rise Again reminds us what we've got to look forward to, fingers crossed, in a couple of months time.

The Charlatans played Then, Just When You're Thinkin' Things Over, Plastic Machinery, A Man Needs To Be Told, My Beautiful Friend, Bullet Comes, Bad Days, North Country Boy, Come Home Baby, Different Days, You're Not Very Well, The Blind Stagger, Weirdo, Can't Get Out Of Bed and One To Another.

The evening is rounded off by interviews with each of the bands with John Robb, focusing on the current activities of LIINES and Ist Ist and giving insight into how they work and their plans for 2021 and beyond whilst the chat with The Charlatans talks through the rocky and often tragic path the band has taken over the years and ends with talk of a number of retrospective projects that they're working on.

LIINES' official website can be found here.  They are also on Twitter, Facebook and Soundcloud.  They play London The Grace (September 9), Manchester Bread Shed (11), Bristol Dot To Dot (25) and Nottingham Dot To Dot (26).

Ist Ist are on Facebook and Twitter. The white vinyl repress of the album and CD and DVD versions are available from their shop as well as their Live From The Attic vinyl / DVD / CD live performance of the show. Digital versions of their previous limited edition releases and a number of live field recordings are available to download from their Bandcamp.