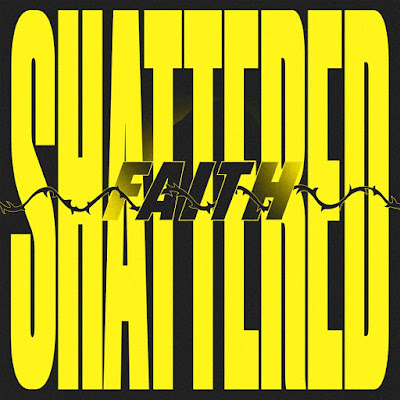 Without having released a single in the traditional sense VLURE had already made their presence felt with a live performance video of Desire at the tail end of 2019 and a series of support slots where they threatened to upstage the headliners. 2021 sees them belatedly, for reasons we all know, enter the fray with Shattered Faith - more an unequivocal statement of intent than a debut single.

Sounding quite like noone else around at present, Shattered Faith introduces itself with a wall of electronic sound that hits you like a juggernaut, turns round and runs back over you and doesn't stop for three and a half minutes. Out of the shadows come menacing vocals, one minute wild, the next with the deadeye accuracy of an assassin's footsteps steadily getting closer and closer, building you up for the final fatal blow. And somehow they squeeze all this in under four minutes where Desire, with which Shattered Faith is coupled on a 7" single had taken six and administered its attack with more subtlety.

A double A-side single of Shattered Faith / Desire (live) is available to pre-order from their store, Resident Music and Rough Trade.