The Blinders - Live From The Bottom Floor

To celebrate the release of their second album Fantasies Of A Stay At Home Psychopath, The Blinders performed an hour long live set with an expanded five-piece line-up on Monday night that was streamed to purchasers of the album.
For a band with such a strong live focus, The Blinders have been hit harder than most by the inability to play shows for the past four months. Their campaign for this record was halted in its tracks for its original May release and the situation hasn't improved any for its rescheduled release last Friday. Having been able to rehearse again in their canal-side studio in Manchester and co-opting crew member Thomas Castrey standing in for the absent Matty, Eoghan Clifford from Cabbage providing additional guitars, Paris Taylor (last seen fronting Freakout Honey) and Callum Chesterman on keys, they've put together a live performance of tracks from the album mixed with a few old favourites to stream to fans who'd ordered the album via their official store.
Where this stream differs from many we've watched is that it's been pre-recorded and edited and using multiple cameras it really creates an intense watching experience. Sam Crowston has done an incredible job in editing this, capturing close-ups of Thomas in full flow yet not making this a one-man show. There's moments where Charlie's bass leads the show and the focus is on him, whilst Eoghan's guitar work which sheds new light on many of these songs is also appropriately recognised. The keys and Paris's backing vocals provide detail and subtlety and help the older songs that complete the show at the end to feel fresh and reinvigorated. The audio sounds right on the nail too being mixed properly rather than relying on a live feed. Whilst there's an excitement of watching something on screen as it happens, this experience felt like it was more inclusive surprisingly. 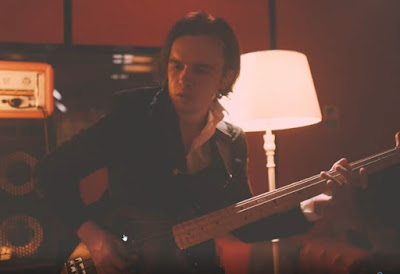 The focus is of course the new record and the album is played in full in order other than the final track In This Decade. The songs are cast in even more vivid life by being able to see the whites of their eyes whilst performing them even without the theatrical elements that made up part of their live show with Columbia. Here they've turned into a serious rock band; the edge on Something Wicked This Way Comes, the piercing venom in Thomas's stare of 40 Days And 40 Nights and the wild angry disbelief at the state of our leaders in Lunatic With A Loaded Gun feels more raw yet targeted in these songs in this space.
Circle Song reinforces the fact that they've grown as a band since they recorded Columbia and mastered the ability to control the emotional impact of their songs without the head rush of adrenaline as their main weapon. Thomas subtly changes hero to shero at the start; a little attention to detail but the mark of the perfectionist approach they've taken to the album two and indeed this performance that also shines through in I Want Gold, one of the album's and tonight's standout moments. The pace is slowed down for Interlude, where the keyboard comes to the fore and the close-ups of Thomas half-singing half-speaking might mean that you can pause for breath, but you can't take your eyes off the screen.
The second half of the record really does see them spread their wings - and once again Eoghan's guitar parts really flesh out these songs - Mule Track starts in a wall of feedback and Rage At The Dying Of The Light and Nothing To Abundance show a more widescreen ambitious approach to their sound that really flourishes with the extra musicians. The camera work perfectly accentuates this too. And they save the best of the new album tracks tonight till last. Black Glass is brooding, menacing, building slowly and then revealing its full ferocity. 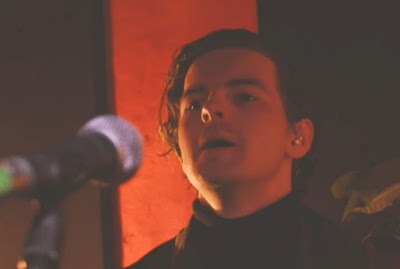 The quartet of Columbia material (quintet if you include parts of The Ballad Of Winston Smith being dropped into the breakdown of Brutus) is powered up by the extended line-up, not just relying on sheer power, but something more controlled without diluting the anger of ICB Blues, which feels more prescient today than ever, the spikiness of L'Etat C'Est Moi and the wandering extended Et Tu / Brutus combination, including a section where they strip everything back and Charlie's bass takes the lead, that finished off so many shows in the Columbia phase.
"That's yer lot" Thomas says with a grin on his face as it reaches its conclusion and the credits roll. This was a genuine success - the intimacy of a live show felt closer to us watching this than many of the live live streams we've seen thanks to the camera work and mixing and the claustrophobic setting for the performance. It confirms too that in Fantasies Of A Stay At Home Psychopath, The Blinders have created a more than fitting follow-up to Columbia, stretching the boundaries of their sound without casting aside the core of what made them so exciting when they burst onto the scene.
The Blinders' website can be found here and they are on Facebook and Twitter.