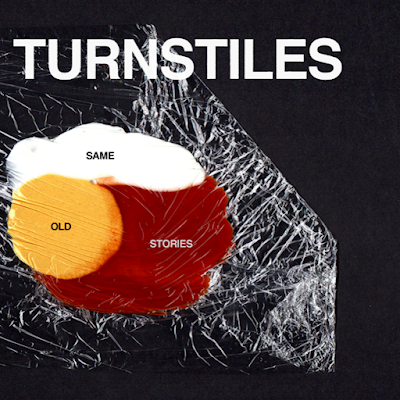 Well it really is the same old story as fifth single Same Old Stories sees Turnstiles continue on their upward trajectory with another punk rock number that leaves us with high expectations for their debut album.

Recorded in Dublin’s Windmill Lane Studios, the Galway based quintet’s knack of capturing their live energy on record continues with a two and a half minute full frontal attack that gives you no time to breathe as they get up close and personal. It’s so in your face that social distancing goes straight out of the window.

The relentless thumping drums, dirty heavy bass and furious three chord guitar work run the length of the song as disillusioned frontman Callum Mitchell, full of angst, rants and raves about hope and the inevitable despair that always follows when things seem to be going well. It’s a proper punk rock song epitomised by the youthful outfit who are “oh so young and full of glory”.

While the thought of a sweaty moshpit seems light years away right now you can imagine yourself bouncing off the walls in unison with fans and band alike to this song. Angular guitars from Colm Sweeney and Cillian Ryan, punchy headlong drumbeats from Luke Mulliez and the bellowing vociferous vocals from Mitchell, all at breakneck speed, mean there’s nothing left to give.

It's a song sung from the future about the past as Mitchell tells us “cherish every minute, every second when you’re young, because no one seems to notice when you’re standing in the sun”.

Jake Tiernan’s slick and aggressive bass playing is standout on this track as he dictates the tempo syncing tightly with Mulliez driving the beat forward relentlessly with speed, stamina and power. This in turn inspires Mitchell to continue stoking the fires with the same old story accusation and the battlecry “You don’t want to end up with that kind of regret”. Such disillusionment, anger and resentment still at the forefront of his mind as a virtuoso guitar solo ends with a screeching climax.

With live gigs still so far away the frustrations of the band must still be prevalent but by capturing those frustrations in the studio and on record these are the perfect way of preparing for what will no doubt be special shows on their return.

It’s safe to say it will be the same old story when they return to the live circuit and release their debut long player. Expect electrifying, raucous shows with spiky, edgy sub three minute punk rock classics like this.