Lanterns On The Lake - The Realist EP 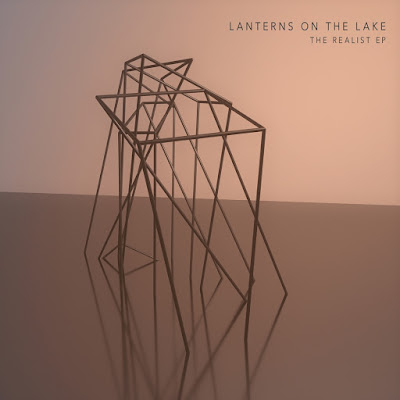 The Realist EP is a collection of songs that didn't quite fit on Lanterns On The Lake's Mercury-nominated album Spook The Herd - four new previously unreleased songs and a radically different Model City version of the album track Baddies. Whilst the tracks might not have fitted on the album, that's absolutely not an indicator of inferior quality - and the EP provides a broader view into the creative processes of the Spook The Herd sessions.

Hazel Wilde described the opening (and title track) “The Realist is a song about being a dreamer, clinging to a vision and following your heart  - even when that path can seem deluded to others" and that's reflected throughout the song. There's a key line that repeats -  "every moth needs a flame" - that wins out against the battle of doubt and doubters - "this lonely tightrope is hard enough, don't pull me down." The imagery is vivid, talk of pixelated blueprints, looking for beauty in brushstrokes that are in plain view but not immediately visible. And like the album itself, there's something about the way the piano is used that makes it get under the skin and dictate the mood of the song and the listener's reaction to it.

Understudy was first revealed at a Hazel Wilde solo set supporting Mercury Rev in 2017. Musically so sparse to be almost not there at parts it creates a tense atmosphere that builds as more instruments and haunting melodies are added that you could slice through with a knife. That's also reflected in the lyrics - two lines in particular -  "I can't tell where the white lies end and the real ones begin" and "we're never really sure where real life starts and where we pretend" - that add to the claustrophobic and disarming feel of the song that draws you into its mysterious spell as it progresses.

Baddies (Model City Version) is a stripped down version of the Spook The Herd which takes away the rich arrangements and dramatic production of the original and replaces it with a solitary piano and strings in the back of the mix that heighten the uncertainty of the words that Hazel is singing. There's a sense of resignation and subtle intonation in parts of the vocals that makes this feel even more affecting.

Romans will be familiar to Lanterns On The Lake fans as it was given away as a free download for a very short period around the time of release of Spook The Herd. It's probably the closest fit of the five tracks here stylistically to the album because of its fuller band sound. It's built around the line "be my saint, be my alibi" and takes the listener on a journey that Lanterns have mastered the routing of - intense and detailed without ever being overbearing. It's a very hard balance to find, but one that they've found the magical formula for across this period.

Model City completes the EP with a gorgeous instrumental that's built around atmospheric effects to give a soothing calming sensation to the listener. It's one for dark late nights to accompany your innermost thoughts as you ponder, a soundtrack to an imaginary film running through your head.

Discussing the creative process behind the EP, Hazel stated "We wanted to sculpt an intimate headphones record. One for the introverts and dreamers, the ones that still find beauty and magic in things" and in The Realist, they have achieved that in an understated manner. What might first sound simple is on further investigation delicately intricate and detailed, that beauty coming when you really listen rather than have it on in the background. In many ways it's like Spook The Herd in that respect, but The Realist is more sparse and fragile but every bit as rewarding a set of songs.

Spook The Herd is out now on vinyl, CD and download via Bella Union and can be ordered via their web store. Our review of the album can be found here.

The Realist EP is released this Friday (December 18) and it can be pre-ordered here.