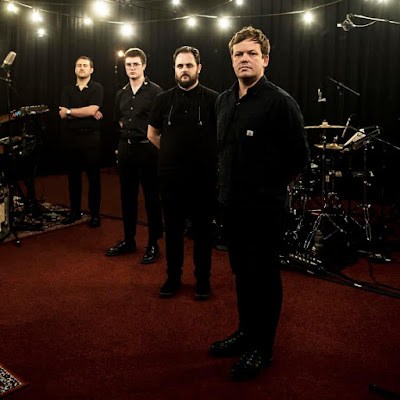 Live From The Attic was the first opportunity for people to hear Ist Ist's debut album Architecture played live in its entirety with the addition of a few old favourites and the first airing of a brand-new track from the sessions for their second record. The self-released album hit number three in the independent charts in May against the odds and has consistently won new admirers since. Yet as the evening was to prove, Ist Ist are at their most formidable in the live environment even without an audience present as they deliver an alternate version of the songs from Architecture that will cement its place in the hearts of those whose path it has crossed.

Gravediggers Union, featuring Architecture's producer Michael Whalley and Nik Brierley, open up the stream with a seven-song pre-recorded set that includes six originals and a cover of Daniel Johnston's True Love Will Find You In The End, a song they rightly describe as one of the finest ever made. Their mix of keys, drums, guitars electronic effects and Nik's treated vocals is an intoxicating and individual one - and a perfect starter for the evening.

There's a sense of urgency and experimentation running through tracks like Ghost Dance and You Know Pain that will appeal to fans of the headliners. Nik's vocals have a deceptive depth to them that burrows into your brain as the set progresses whilst their mixing of live and prerecorded instruments makes for a fascinating set of seven songs that definitely warrant further investigation.

If the world was normal, Ist Ist would have taken their debut album Architecture, which reached number three in the independent album charts, number four in the vinyl charts and five in the physical album charts back in May, out on the road this year. They've stayed silent, lockdown videos don't really work with this style of music and socially distanced shows don't either, until this live stream where they reveal a live performance of the album in its full glory. 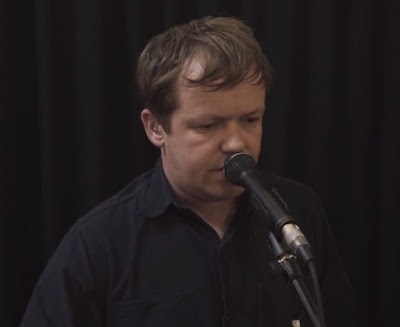 They start with a short set of five older tracks though from their first two EPs - Spinning Rooms and Everything Is Different Now which in their own way formed an alternative debut. Here though, the songs are imbued with a power that the recorded versions simply didn't possess - a mark of how far the band have developed over time, clearly taking advantage of the downtime to absolutely perfect their craft. As we watched, we got three separate messages commenting on the power of Adam Houghton's voice, commanding, dominating and expressive in its own uncompromising way. That it stands out when the band create songs with such lift and momentum yet over which they have absolute control makes that ever so more remarkable.

Emily, one of their oldest tracks from their 2015 demos, acts as a barometer for the band's progression whilst Jennifer's Lips, I'm Not Here and Exist feel like they're on steroids compared to their recorded equivalents. Preacher's Warning, recorded when they were a three-piece, has the menace factor dialled up by Mat's embellishments on the original. A new song, Fat Cats Drown In Milk, taken from their second album that they're in the process of recording, hints at them developing their sound still further, the yearning in Adam's voice as he asks "do you love me, do you love me?" suggesting that we're in for more of the dark melancholic majesty that runs through the debut that follows. 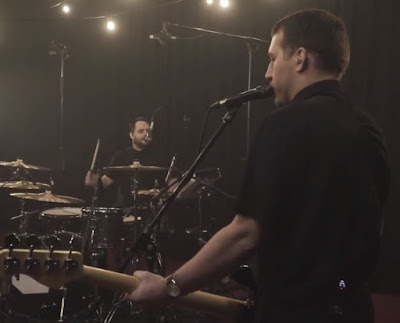 Ist Ist have always been at their most powerful live, from the early days when they would simply obliterate anyone else on the bill with raw power to the more controlled, yet conversely far more potent, approach they adopt these days. They use all four vocals to give this collection of songs lift at just the right moment to take them off into the stratosphere, fully cogniscent of the impact it will have on the listener, or in this case the viewer. They've clearly not just sought to replicate the album versions here, they've continued to work on the songs, looking for that little extra to give to the audience, but you know that they're doing it because they can't work any other way.

The moments of subtlety, like on the mournful A New Love Song and Drowning In The Shallow End, feel heartwrenching, like Adam is laying everything down on the line, out there for everyone to observe, lost in his own world with his three bandmates providing the funereal soundtrack. There's a point in Under Your Skin, if we had to choose a favourite track, where the band take over from Adam's dark desperation and let loose for twenty seconds respite before he descends back down. Yet, when Silence, Black and Night's Arm reach their choruses, the lift is the sort that will sweep you off your feet and immerse you completely in the music at the very opposite end of the scale. When they let loose for the final two minutes of Slowly We Escape, the album and stream's final track, the song's title conveys the manner in which they free themselves one last time - and it feels as fitting a way to end the broadcast as it does the album. 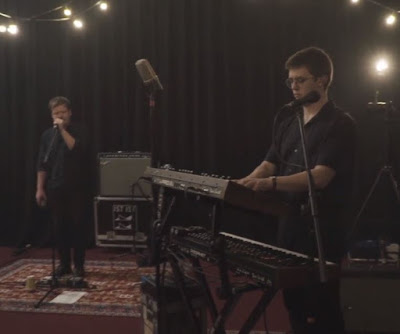 The video set-up is sparse and simple, the four of them stood in a square facing inwards with the cameras moving around them, yet this simply adds to the powerful effect of the performance that you wouldn't get from a venue-shot live stream. You can at most points see the camera focused on one of them, but watch another in the background of the shot. It focuses on each of them, not just on Adam as the front man, like the music being the mark of the collective being greater than the sum of the individuals.

Ist Ist are creating something special that might well go under-appreciated in its time, although there's increasing evidence that the recognition they deserve might be coming, yet which will undoubtedly stand the test of time. Everything they do these days seems to have a professionalism that's lacking in many corners of the music industry if you look at what's done rather than what's said - and yet they do it and retain and augment their authenticity with each turn they take - a band of music lovers to be loved by people who love music. Live From The Attic is yet another chapter in that story

Their album Architecture, which reached number three in the independent album charts, number four in the vinyl charts and five in the physical album charts back in May, is available to order from their store on vinyl as well as CD, cassette and download. Our review of the album can be found here.

Gravediggers Union are on Facebook and their Live In Lockdown performance is also available on CD from their Bandcamp.