TRACK OF THE DAY : The Red Stains - Freezer Jesus 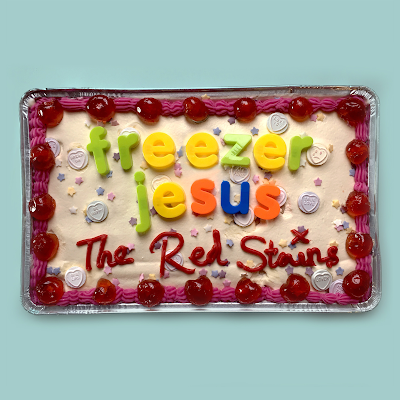 The Red Stains return with their second single, live favourite Freezer Jesus, and their first ever video that captures both the wild lyrics of the song and the chaos that seems to follow the band around wherever they go.

Having announced themselves on the Manchester scene before even releasing a song with their fiery unpredictable live shows and their ubiquitous The Red Stains graffiti, the band had a lot to live up to with debut single Mannequin and they delivered a track that like the band themselves would divide opinion - we said of them "You'll either really love The Red Stains or despise them with a passion - there is no middle ground and they wouldn't have it any other way. But they're not going to go away so you better get used to them." Fortunately the lovers outweighed the haters.

Covid put an abrupt stop to their plans for world domination but once restrictions were lifted they got back in the studio with Samuel Hunter to record Freezer Jesus, a stand-out track from those early live shows. It's been given a polish for its release but it still manages to distill the riotous energy of the band into a four-minute railing against forced consumerism. Pointed yet retaining a wicked sense of humour - "Well the joke’s on you, cause I’ve seen Jesus, he was buying chicken nuggets out an Iceland freezer" and "Well, who needs gods when you’ve got shops, selling dirty socks for a half price bargain, go and rinse Primark like a corporate Marxist as I’m switching up all your clothes’ tags like a right con artist" - the song feels like a massive step in the band's development.

It's accompanied by a video shot by Loose Articles' Natalie Wardle that takes aim at the sell-sell consumer culture through decapitated dolls, squashed gateau, dodgy car salesmen and Manchester's shopping paradise The Arndale that gets name-checked in the song.