TRACK OF THE DAY : Loose Articles - Up The Disco 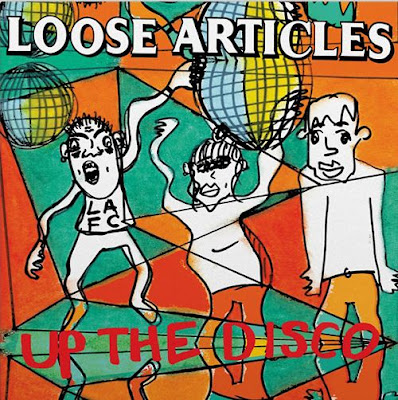 Loose Articles return with their first single since last year's Orchard Lounge EP. Up The Disco is a riotous barrel of fun that doesn't take itself too serious accompanied by a music video that follows in the same vein.

The band came together over drunken evenings in bars around Manchester's Northern Quarter deciding "We’ve got loads of lad mates who are in bands and we just thought lets do it.It was a very drunk convo at a party that turned in to us all actually starting a band. So we started practicing above the Castle Hotel, wrote a few songs and the rest is history!"

Up The Disco comes from that same head space, the video featuring their beloved cans of Stella that have formed the stolen genius idea behind their logo and a tripped-out party scene  - "A lot of the inspiration came from partying with our mates. The term sexy boy came from our pal who kept calling a guy from her work a sexy boy. ‘Sexy boy’ stayed and worked. The verses were about Natalie basically checking out those very special sexy boys at a club. It's pretty funny that guys sing about girls in such a way a lot so I wanted to play on that and turn the tables a bit. Then the ‘up the disco’ came from our very good friend Ainsley who’s a DJ and was the main star of the music video. A video went round of him at Beatherder festival shouting ‘up the fucking disco’ and that just made such a brilliant line. Like all of our songs they start with a lot of swearing, then we slowly edit it out. We basically wanted to make a tune that makes you want to get up and dance.”

The band have just secured funding via Manchester International Festival's MIF Sounds scheme to record and release their next EP. The single is out via Dipped In Gold Recordings and will be released on 7" teal coloured vinyl. The single has already been played by 6 Music's Steve Lamacq.  Their Manchester Yes show has just been rescheduled from 19th December to 21st June 2021.

The Orchid Lounge EP can be purchased on CD here. The 7" can be preordered from Piccadilly Records.