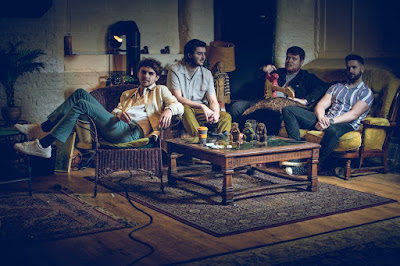 Dial back two years and Proletariat were on many people's lists as the next band to break out of Manchester and then, almost overnight, they announced a split and disappeared. Now they're back, with a new line-up, a powerful new single Go Ahead and a new approach to what they do best. We caught up with front man James for a chat about what happened and what's going to be different in 2021 for Proletariat.

How have you found the response to the comeback announcement?

Today has really blown me away. Two years is a long time, and we’ve been working behind the scenes for seven months, but as it got closer to the announcement today, it started to loom on me – ‘how are people going to react?’, ‘how many people have missed us, remembered us or listened to our music?’ But the response has been everything we ever wanted and more. It’s been two hours since our announcement and responses are still popping up.

Seven months is a long time planning. You could have just come back, announced it and done a gig, well not done a gig... it feels like reading the press release and the conversations we’ve had on email, that there’s a lot of thought and planning gone into exactly how you are going to do it.

That’s it. This is the first and only band I’ve ever been in, and the only band Connor has ever been in. We hit the ground running the first time around but we didn’t really know how to go about it, what we needed to do to keep going further. We were putting music out and playing gigs, which is a pretty big part of being in a band, but there’s a lot more to it.

You were selling out gigs and getting good reviews, you don’t necessarily think about structure when it’s going so well.

This time round we sat down and asked ourselves ‘what do we want to achieve and how are we going to go about doing it? What are we going to do different that will make us attractive again?’ That was the challenge we had - basically coming back and looking fresher and sounding fresher, and people will hear that soon.

What happened to you? You were flying, selling out gigs and suddenly it was ‘we’re splitting up’?

It was a very strange situation. Like you said we sold out seven out of seven headline shows in Manchester, we got played on Radio 1, played the Isle Of Wight Festival and we went on tour with Cabbage. We were loving every minute of it – and then all of a sudden there was an uncertainty about musical direction.

We’ve got two new members now – so obviously two people left. That was straight after the Night And Day show and there was going to be a lot of pressure on us to get a new band together, get up to scratch with the set and write new music within a really short amount of time. To be honest, we were a little bit lost, we didn’t know how long that was going to take, or who we were going to find. There was a lot of pressure and there didn’t seem to be a solution.

The last thing we wanted to do was put on a shit show for people or be together but disappear, so what we did was the best thing to do. We needed to make a clear decision and that was the one which people saw, us calling it a day.

There was always the question of ‘will we, won’t we?.’ Connor and I have always been like brothers and we were always going to do something together again one day. For us, it’s a new band. Obviously the name is the same, but we’ve got two new members who have been like a breath of fresh air.

Did you ever think about changing the name?

I feel like it’s part of our identity now. It’s a weird word in itself, it’s a long intricate word and I think it represents us quite well, not in a political sense, but what it means on paper – which is working class. A group of working class people and that’s very much what we are – a group of working class lads. We’ve always had to scrape together and fund everything ourselves. Similar to the likes of Oasis, they’re very much proletariat; they’re a group of lads from a council estate who fell in love with guitars and made themselves from it. I think it just represents us quite well still.

You’ve got a new single called Go Ahead. Is that a song from the first period of Proletariat or is it part of a whole new series of songs?

A bit of both really. Go Ahead was in the works towards the end of last time. It’s been rejigged and refigured out and polished a bit more. We had played it a few times live, but when you think about that version and the one now it’s like a different song. I think it’s clearer in its sound and what it’s trying to achieve musically, instrumentally and melodically.

Is that part of the difference you’ve spoken about now rather than before? A change of musical direction, four people pulling in the same way?

We’re very much on the same page now. Those original songs still mean the world to me today, but they were very restricted in the way they were created; they were just very fast-paced choppy segments stuck together. This time round we were thinking about melodies, the flow, the structure and where things were being injected in different places. We’ve got a lot of songs that are hidden away that we’re working on that highlight that. They’ve got a lot more character and flair this time round.

That sounds clear listening to the vocals on Go Ahead than the older songs. The vocal sounds more polished but the anger is still there. It’s more direct and in your face than on something like Mr Brown and it stands out more.

Sometimes the older songs and the message itself was quite angry and had angst to it. That was one of the key points I wanted to address when I phoned Connor up and said ‘I really really want to do it again, I can’t ignore it anymore.’  Musically I want us to create something that’s more inviting for people. I don’t want to put a gig on that’s all about doom and gloom and this is what is wrong with the world. I want to invite people to party. I want people to have a really good time when they come and see us. Now it’s about finding that energy and flair, it’s all a bit more groovy and colourful.

That takes time to develop. Bands like The Slow Readers Club and Ist Ist were very different at the start and it’s good that you have the time to develop that identity as it makes you stronger and last.

And the fact that you still wanted to do it, because once it gets going it becomes a momentum and stopping makes you reconsider that.

Yeah you’re right. I went to South America and explored a different part of the world, new cultures and learned lots of things, but even while I was away, and especially when I got back, there was always this little niggle in my brain, about what I wanted to do about this and whether I was going to get back to it. It was that sense of hunger and longing that couldn’t be ignored. That was the pivotal part. If I hadn’t have had that, there wouldn’t have been the announcement today.

What have you got in the pipeline?

At the minute, all I can say is the obvious. We will be playing live again whenever we can. We’ve got dates booked, venues, headline shows ready, but we’re just going to see what happens with COVID. We’re sitting on them, we don’t want to announce something until we’re certain we know they can go ahead.

In terms of music, there’s a lot of songs ready. Go Ahead is out. We’ve been in the studio and recorded a handful of singles. We recorded at Elevator Studios in Liverpool where we re-recorded Derogatory last time round. We just feel at home there, from the first time we went we got on really well with Tom the engineer and we work really well in there. We went in the first weekend in August and couldn’t recommend it highly enough to anyone looking for somewhere to record.

With visuals, it was something we ignored last time round through inexperience and naivety. The visual element is about content, the music is part of that, but videos and artwork have to come with that and help piece it all together. It’s a big focus this time round and we’ve been working with Nige (Trust A Fox). We’re pushing the boat out with creativity in general. Image was something we didn’t really get right last time. There will be a new sound, and a new aesthetic and a colour to us. We were very black and white in image and music and that’s changed over the last seven months.

What is your plan next then after the single?

There’s a provisional date for the first headline show and there’s a plan for at least four singles before that. That’s all I can say for now. We want to make up for lost time and we’ve got a lot to offer people.

That’s good to come back with a set of new songs but people know them, rather than old songs that you might not feel the same excitement about.

One of the things we’ve done really well this time round is we’ve been really strict. We set a bar for ourselves. A good handful of the old songs have been chucked in the bin. There’s one song in particular we’ve written in the last seven months that has really raised the bar completely and anything that’s less than that level doesn’t make it.

We are bigger and better than last time round. We understand what level we want to go to this time and the standard of the music we’re putting out is very much part of that.