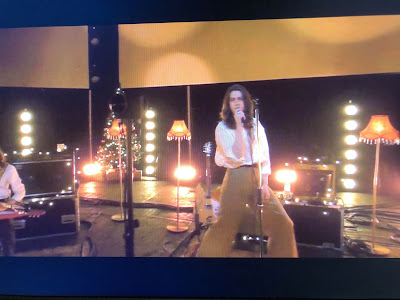 Back in March, Blossoms' biggest UK tour to date to celebrate their number one album Foolish Loving Spaces was cut off in its prime. Nine months on, they performed a live stream from on stage at Brixton Academy with songs taken primarily from that album.

There's a scene not too far into the stream where the infamous raked standing area of Brixton Academy is visible behind Tom and you realise what we're missing out on this year as restrictions have laid bare the music industry. But Blossoms have, like many others, improvised and come up with a live stream that doesn't try to replicate exactly a live gig with no audience - which can be as soulless an experience as football with no crowd - but which takes a different approach and in this instance delivers a unique performance that retains intimacy and makes the watching crowd at home at least feel a little bit part of what's going on. With red lamps, the band and accompanying musicians stood in a circle with strip lights around them and a couple of Christmas trees for festive effect, there's an intimacy and warmth to the set-up.

The set opens with Tom performing Blown Rose solo acoustic, a keyboard adorned with LOVE in the style of the Foolish Loving Spaces font lit up behind him. Stripped right down it demonstrates the timeless quality that so many of Blossoms' tracks possess - joy, uncertainty, heartbreak and optimism fighting for space - universal themes that run through all of their three albums and which allows them to make connections with both young and old once they're allied to songs that possess a magical ability to immediately feel familiar and put a smile on your face.

Foolish Loving Spaces' two singles The Keeper and Your Girlfriend and its predecessors' There's A Reason Why (I Never Returned Your Calls) and I Can't Stand It that follow are a case in point - back to back with little interaction other than a "we are a band called Blossoms from sunny Stockport" introduction, they feel like, exactly what they are, the first canon of an impressive set of a greatest hits compilation that will come inevitably soon in their trajectory. Getaway also feels soaringly effortless, a perfect pop song of the kind Tom Ogden seems to produce in his sleep without them ever sounding like they come from a formula. 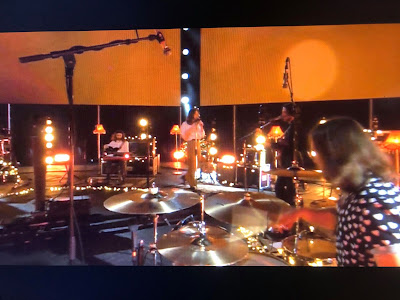 They've not paused for breath yet, My Swimming Brain makes judicious use of Charlie and Colette Williams' backing vocals to give it a dreamy uplifting undercurrent and sees Tom starting to relax and move around more, throwing off his shoes. He then talks to Joe who tells him he never has a mic and there's a little chat of the rest of them telling Tom they don't have nothing much else to say so they jump into Sunday Was A Friend Of Mine. Tom struts around again, pointing into the camera at the line "time spent with you." It segues smoothly into If You Think This Is Real Life and even though the opportunities to play live have been limited, they slip into the groove like they've been on tour months.- gloriously loose yet fully in control, Tom ad-libbing added words into the song and at the end declaring "unfortunately it is." Tom discusses Josh's herbal tea at the end of the song, slightly surreal as it's more words than we've ever heard Josh speak at a gig before. They kick into Honey Sweet with a short section at the start not present on the recorded versions.

Tom's guitar gets changed over by a Santa so it's time for the band's new single Christmas Eve (Soul Purpose). It's very much a Blossoms song, but laced with seasonal references and the sentiment of "it was Christmas Eve, I found my soul purpose, peace on earth in three words" with accompanying bells.  The flipside It's Going To Be A Cold Winter turns that on its head, wanting it to be over with the Scrooge-like "it is the season that I shall moan" message delivered tongue-in-cheek with the line "no toys, no trees, no trimmings won't change my mind."

Charlie jokes he nearly fell over his Cuban heels so kicks them off. From their newest songs they then move to one of their oldest Blow with a section of Deep Grass added on the end with Vryll Society's Ryan Ellis adding extra guitar. After introducing Ryan, Colette and Jon Simm, they move into Like Gravity, Foolish Loving Space's final track which also provides it with its name. It still shows Blossoms' desire to stretch their sound past the seemingly endless stream of perfect pop singles that have preceded it.

Falling For Someone is introduced as "a song about being in love and we need a lot of that right now" and Tom gets the first lines wrong but laughs it off by acknowledging that in the next line and looking at the others and saying "come on, one out of the whole set" and continuing unfazed. One thing that's noticeable in the strength of these songs is how Blossoms have sidestepped the issue that plagues many bands - that fans want to hear just the old material and are less interested in the new songs.

Oh No I Think I'm In Love starts and ends with a solo keyboard line sandwiching the euphoric rush towards the end of the set, the band now fully relaxed and letting their hair down.  There's one last conversation between the band taking the piss out of Myles' dry lips and his nervousness at having to speak when he's not used to. At Most A Kiss is stretched, extended, accelerating in its outro before dropping into just Joe's drums, Tom's farewell words and then the unmistakeable intro to Charlemagne. It's strange to hear it without being surrounded by people losing themselves to it these days, but these are the strangest of times.

Blossoms should be on the victory lap for Foolish Loving Spaces now, a Manchester Arena sell out and a summer of festival top billings behind them, but we know fate conspired to cut that trip off in its infancy on their March tour. They've improvised, kept themselves in the public eye with lockdown versions of theirs and other people's songs and a live album recorded back in Stockport whilst behind the scenes getting to work on album four. Like what they've done before, this stream is executed to perfection - a picture of where they are and who they are as a band and a reminder that they have a growing armoury of songs that will stand the test of time.

Blossoms played Blown Rose, The Keeper, Your Girlfriend, There's A Reason Why (I Never Returned Your Calls), I Can't Stand It, Getaway, My Spinning Brain, Sunday Was A Friend Of Mine, If You Think This Is Real Life, Honey Sweet, Christmas Ever (Soul Purpose), It's Going To Be A Cold Winter, Blow, Falling For Someone, Oh No I Think I'm In Love, At Most A Kiss and Charlemagne.