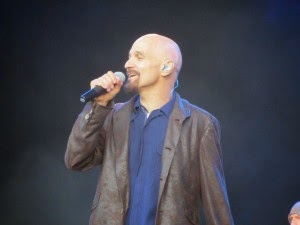 James opened up The Forestry Commission's 2013 series of events with a show in Thetford Forest.


James fans have long demanded a forest gig.  Thoughts of a triumphant sort of homecoming at Delamere afforded to some of the city's other favourite sons would rank up there with their other live highlights.

Instead we're afforded a damp Thursday evening in a beautiful forest in the middle of Norfolk (or is it Suffolk, I can never work out where Thetford is).  This is reflected in a disappointing poor turnout, particularly as the rain clouds hit the area early evening when wavering punters would have been making last minute decisions.

Such things have never worried James though.  They start off with a trio of more familiar hits - Waltzing Along, Ring The Bells and a drawn-out elongated version of Sound.  Tim states they want to mix it up a bit from the recent April tour, hence the reappearance of Ring The Bells and Tomorrow later on in the set.  Waltzing Along benefitted from a rebirth in April and it still sounds revitalised from the more tired versions of previous years. Sound stops and then starts again at the end with the band going into a free-form improvisation that takes the song to over ten minutes.

The magical thing about James is that they resist the urge to just regurgitate their best-known material and rest on their laurels. Tim's on good form, joking that there's no violin for the next song which is Five-O from the Laid album. Saul Davies' violin is a much underused weapon in James' armoury, but not on this song.  It drifts through the night air as the beautiful extended intro builds into the main body of the song.  Laid is twenty years old in October, but you'd never get tired of hearing songs like this especially when they breeze such new life into them with regularity.

Next up is the equally wonderful Of Monsters And Heroes And Men from their 2008 Hey Ma album. We then get the first new song of the evening called Let Us Die, which seems to be continuing the theme of the new songs about death, loss and changing situations with lyrics enquiring about how to "put this vehicle in reverse" and talking of "all we used to know". It's still a work in progress, but it sounds extremely promising for the first time it has been played to an audience.

They go back to the more familiar for How Was It For You? which gets people dancing, but rather than settle into a row of hits, they go back to another track from Hey Ma.  I Wanna Go Home is almost them showing off.  What's a relative simple plaintive song on the album is transformed into a monster live.  It starts off all unassuming with Tim half singing half whispering before kicking into an extended end section where Tim holds a note for over a minute whilst the other six create an ascending cacophony of noise before descending back into almost quiet reflection. 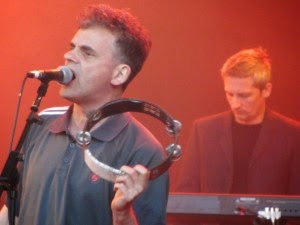 Speaking of cacophony, Stutter is the song that should define it.  This song appeared on their first demo tape in 1982 and was the first aborted mix of the Strip-Mine album five years later, but as yet it hasn't made a release in studio form.  They'd be foolish to think of recreating it in that environment.  It finishes with three of them playing drums, Tim on keyboards and Saul playing Larry's white guitar with a drumstick whilst strobe lights fly around the arena.

Back to the more familiar.  Seven, which was ignored pretty much after Alton Towers in 1992, has found its way back into favour, even opening up their first show back in 2007.  Similarly, Just Like Fred Astaire, like most of Millionaires, went through a phase of being excluded from set-lists despite it being a fan favourite.  Tim goes out to the barrier and sings most of the song perched on it with only the strong arm of one of the crowd for support.

The second new song Curse Curse is a bit more immediate.  Tim has his lyrics on his Ipad, Saul jokes that he has a distinct advantage over the rest of them and that they may end up looking like dickheads.   It's a typically brave James move unveiling new songs in venues like this.   The song itself is driven by a pounding drumbeat with flourishes of trumpet and has a hook line of "praise the lord and kiss me on the mouth" and, like the best of James' back catalogue, it feels like there's three or four songs all fighting to burst out of one.  At the end Tim tells us that it'll be amazing once we get to know it.  It already feels like it could be a special song, even amongst the seven they've now previewed from the album they start recording on Monday. 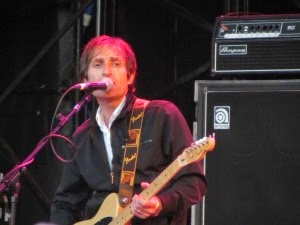 The final new song is Moving On.  It's the most immediate obvious radio song that they've done since they got back together in 2007.  It's ostensibly about the death of Tim's mother, but it could be interpreted as a song about someone making drastic changes of any sort in their life with lyrics such as "now my bags are packed and my sails are tied and my course is marked by stars".

Johnny Yen is James in one song.  It endures because it's forever changing.  It's transformed from a simple four minute song from their debut album into a sprawling nine-minute partly improvised beast. It never sounds the same twice as well. The set is completed by a trio of their best known and most popular hits.  Tomorrow is one of those three-and-a-bit minute nuggets of indie-guitar perfection that they knocked out with alarming regularity in the 1990s.

Sit Down has been reclaimed from daytime radio as an anthem to be proud of rather than to hide away in the cupboard. It joins everyone in unison singing along bringing a sense of community into the forest. It also has a wonderful piece of improvisation by Mark on where he brings the song back up unexpectedly with his keyboards and the others join in.  They finish the main set with a lop-sided elastic Come Home, a song that doesn't ever feel like it's aged despite being older than some of the crowd around me.

The encore is in similar vein. Saul jokes that the first one is another new one, but it's Getting Away With It (All Messed Up).  The song has almost become their anthem despite it only being a minor hit on release in 2001.  It's the one song that you couldn't imagine them not playing now.

The evening is brought to a conclusion by Sometimes and Laid.  I'd bemoaned the fact that this has finished their set for the past few years and had become a bit predictable, but they've ditched the insistence on trying to get the audience to sing along with Sometimes, letting it happen naturally when the crowd takes it, and it feels alive and vibrant again and a fitting way to finish a two-hour set of the hits, the obscure and the new.

Whilst this wasn't the best gig they've done this year and the crowd was disappointing in size, they're still streets ahead of their more critically acclaimed contemporaries that are milking the reformation cow dry without delivering anything tangible in terms of either new material or fresh takes on their classic back catalogues. 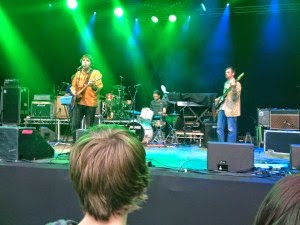 The evening is opened up by the magnificent Frazer King.  They appear, although I didn't get it confirmed when Nathan jumped me half way through James' set, to have undergone a line-up change.   They'd been invited by James to support them and Larry has been involved with the production of their forthcoming album.

As ever, they come across as fairly shambolic and controversial, but that, in its own perverse way, is their charm.  Nathan chides people for getting offended by their lyrics before a song questioning the roots of religion.  I'm not quite sure what the seated visitors to the forest made of them as this isn't their natural environment, but they're progressing to sounding like a damn fine band.

James played : Waltzing Along,  Ring The Bells,  Sound,  Five-O,  Of Monsters And Heroes And Men,  Let Us Die,  She's A Star,  How Was It For You?,  I Wanna Go Home,  Stutter,  Seven,  Just Like Fred Astaire,  Curse Curse,  Moving On,  Johnny Yen,  Tomorrow,  Sit Down,  Come Home Getting Away With It (All Messed Up),  Sometimes and  Laid

James official website can be found here and David Brown’s unofficial tribute site here.  James are on Facebook and Tim Booth and Larry Gott on twitter.
Posted by Even The Stars at 09:29