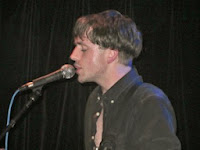 There's been a big buzz about MONEY for a while.  They've recently signed to Bella Union for the release of their forthcoming debut album and they've been selected by the Manchester International Festival to play that album in full over two nights as part of the festival.  We went to see them perform a low-key show at the Trades Club in Hebden Bridge to see what the fuss is all about.


There's a slew of fantastic bands knocking around Manchester at the moment, amongst them PINS, Embers, Brown Brogues, Puppet Rebellion, Purple Heart Parade, yet MONEY are the one that the smart bets are on to make the biggest breakthrough.  They've been around for a couple of years now, releasing a couple of sold-out singles on Sways Records, but their recent signing to Bella Union and release of their first single for them, Bluebells In The Fields, has heralded more attention.  They've just completed a few small dates around the country culminating in this show at the wonderful Trades Club in picturesque Hebden Bridge. 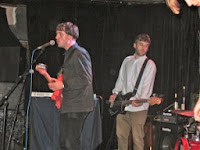 The gig starts with Jamie stood on a table at the back of the venue and he sings the first song totally unaccompanied, making his way through the crowd and kissing a number of people he recognises.  It raises the crux of how far MONEY can go.  He's an unique front man.  He ends up shirtless, singing into a mic stand above his head on the venue floor towards the end.  In a musical environment where image can almost play as big a role as the music itself, he's going to divide opinion as he's in your face forcing you to make a call on what you think about him.  The alternative music scene is crying out for a Morrissey / Anderson for this generation so who knows?

Musically, they're totally on the money, if you pardon the pun.  The rest of the band look on almost disinterested at their front man's antics, yet they create a huge dreamy dramatic atmospheric tarpaulin for him to paint over.  Bluebells is an excellent introduction to what to expect from the album when it arrives, stretching sonic boundaries without resorting to gimmicks or too much pre-recorded trickery.

Each song feels like it's been crafted delicately with immaculate attention to detail.  To be fair, some of it wasted on a Friday night crowd that's talking through parts of the set. They've taken their time to get their sound right and they are now almost ready to take on the world.
Money play The Manchester International Festival on 12/13 July. They will be previewing their debut album in full.  Their single Bluebells In The Fields is out now.