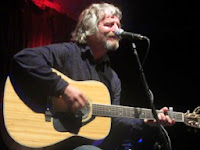 John Bramwell played an intimate rare solo gig at Hebden Bridge Trades Club.  We went along to watch a series of classic I Am Kloot songs.


A solo John Bramwell gig is more than just a musical experience, it’s pure comedy gold rolled in as well.  Before we even start the set he’s regaled us with stories of the nearby Heptonstall Beer Festival, with a tag line of “three days, two pubs and one festival”, where he played a solo set on a hot summer’s day last year and was heckled by morris dancers.

It sets the scene for an evening that’s full of funny stories, rants about the music business and the commercialization of Glastonbury, absurd banter with hecklers about the setlist, including a request for a song that already been played, and his hair amongst other things, mishaps and ultimately over two hours of some of the finest songs of a generation.

The last two I Am Kloot albums and supporting tours have been supplemented musically by strings, brass, keyboards and other additional musicians, but John performing the songs solo strips them right back to their core. His rough edged voice is perfect for tales of drinking and disaster, love and loss, all with that dark foreboding feeling running through them.   Whilst he’s not what you would describe as a classic singer, his vocals are a perfect fit for the stories because it makes you feel like he’s lived through every word of them and in the absence of the adornments of the band format, it casts them into stark reality. 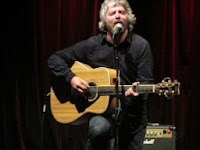 Hardcore Kloot fans have criticized the band recently for the lack of variety in their setlists over the past few tours and quite a lot of the songs from the last few tours are played, but it’s difficult to drop so many of these songs because they’re simply too good not to play and this format allows them to be played as the majority of them were written.  It does also cover pretty much all bases of Kloot’s six-album repertoire.

We are treated to one new song, only written in the past 48 hours, called Time’s Arrow and it bears all the traditional hallmarks of classic Kloot songs. We also get a rare outing for Even The Stars, which John explains they don't like to play because it refers to their friend Bryan Glancy, who passed away several years ago.

These solo gigs have become a much rarer occurrence since Kloot’s star rose with the Mercury nomination for Sky At Night, but they’re practically unmissable, as much for the interaction between John and the audience as for the music.

No Fear Of Falling

From Your Favourite Sky

Not A Reasonable Man

The Same Deep Water As Me

Let Them All In