Sara Lowes: All For The Dream (With The Means Of A Well Planned Getaway) - EP review 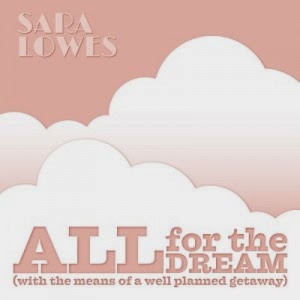 It's felt like a lifetime since 2011's stunning Back To Creation album, but Sara Lowes' new EP All For The Dream (With The Means Of A Well Planned Getaway) is now with us with the promise of a new album and other projects in the pipeline.

She's been out on the road with Jens Lekman and, more recently, as a permanent member of Marina and the Diamonds' touring band, supporting Coldplay on parts of their world tour. She's now fortunately back in the arms of the fantastic Red Deer Club label, home to Literature Thieves, Songs From Walter and an array of under-rated fantastic artists, and the EP is the first fruit of that. It is a natural progression from Back To Creation in the same way that album was from 2008's Tomorrow's Laughter and the three Back To Creation EPs that set the scene for the album. It starts with an instrumental amusingly titled Let's Start With An Instrumental, which opens with what sounds like running water and a dark atmospheric background for the first minute and half before startling the listener by crashing into what sounds like a free-form jazz exercise for the remaining two and a half minutes.

Next up is the EP's lead track, I Find You, which contains the line that makes up the rather unusual title of the record.  It starts with a dramatic keyboard and a loop before Sara's voice kicks in after a minute.  Whilst the EP only has five tracks there's enough ideas in the songs for a whole album.  Given she's been on the road for almost two years, it's no surprise that I Find You talks about going home.  Sara's voice is warm, deep and rich and deserves to be the main attraction rather than the backing role she's had out on the road recently.

Little Fishy starts off quietly, a growing swell of angelic vocals shrouded in subtle keyboards before, a minute and a half in, a frantic edgy keyboard hook sweeps in and Sara coos "On the end of my line, little fishy of mine, heading straight to my plate" before dropping back down before the hook comes back and this is repeated a couple of times before the end. It could sound a mess, but it's beautifully executed.

Night After Night is more traditional in its structure. A stunning piano-led song for a loved one, it showcases a softer side to Sara's gorgeous voice.  It's beauty is in its simplicity, particularly when you offset it against the bravado and dynamics of the two songs that preceded it.

It's back to the drama for final track On The Run, a glorious squiggly (listen to it, come up with a better description if you can) keyboard under-pinning the verse, a number of unexpected key changes, some squealing guitars and vocal harmonies to kill for.  It feels like it could be the theme for a dark mysterious obscure film from the 1970s.

Although it's been a long time coming, the EP has definitely been worth the wait.  It's fresh, vibrant, challenging and slightly unsettling as you never quite know where it's going to go next. Let's hope that Marina takes a rest for a while so that this particular diamond can finally record her own album.  With the levels of creativity shown by these five songs, it promises to be quite some record.

All For The Dream (With The Means Of A Well Planned Getaway) is out now on Red Deer Club and can be ordered via this link.