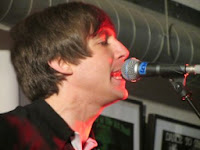 Miles Kane's second solo album Don't Forget Who You Are is released this week and as well as a series of shows in intimate club venues ahead of The Stone Roses support slot on Saturday, he played an eight-song set in Rough Trade's East London store to a packed crowd.


The set comprised mostly of songs from the new album with a couple of old favourites Come Closer And Inhaler for those who were less familiar with the new album.  The new material stands up against his previous work though, without straying too far from the familiar formula of the first album.

Unlike a lot of the artists and bands that have caught on the coat-tails of Oasis, Arctic Monkeys et al, Miles is very much his own man.  The new material, whilst steeped in the traditions of Northern indie guitar rock, has enough personality of its own not to be apeing those bands and it's telling he has the respect of those bands who seem him as a peer rather than someone they've influenced.  His co-writers on the album include Paul Weller, Alex Turner and Ian Broudie, but the sound is unmistakeably him. His band look and sound the part too. 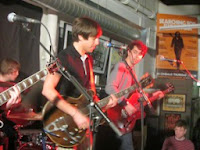 Openers Taking Over and You're Gonna Get It set the scene, they are driven by a pulsing drumbeat and subtle keyboards, whilst the two guitars and bass attack the eardrums without losing sight of the fact these are a set of great melodic tunes.  The other four new songs, Better Than That, Darkness In Our Hearts, Give Up and the title track of the new album, weave the same pattern, but retaining their own identity.  It's a clever trick that Miles and his band pull off.

There's also engagement with the crowd.  He acknowledges the front rows singing along with a beaming smile and when a girl shouts "you sexy scouse bastard" at him, he responds by asking her what she's got to show him while locating her back amongst the record shelves.

In-stores can sometimes be restrictive for an artist, but Rough Trade's set-up, like the rest of the store, is a step-up from your traditional record store, so it feels like a proper full-on gig, except for a lack of moshing.  As a showcase for the album, it was a resounding success.

Miles played: Taking Over, You're Gonna Get It, Come Closer, Better Than That, Darkness In Our Hearts, Inhaler, Give Up and Don't Forget Who You Are

Miles' website can be found here.  He is also on Facebook and Twitter. All in-store events at Rough Trade, which are either free or require purchase of the artist's album can be found at their website.
Posted by Even The Stars at 10:03