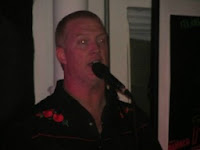 Queens Of The Stone Age

Considering Queens Of The Stone Age can fill venues twenty times the size of Rough Trade East's performance space with no problem at all, an in-store show is a very special environment to witness their first UK set in support of their new album Like Clockwork. We were lucky enough to get one of the elusive 200 wristbands.


Hearing stories of people queuing from 5am last Monday and not getting a wristband, I felt a bit of an interloper having got in on the basis of following Rough Trade's twitter feed announcing the gig to 100 pre-orders the previous week.

QOTSA took to the stage nearly half an hour late, but what impressed immediately was the fact this wasn't a going through the motions sort of set that you get with some bands of this size on the promotional cycle. 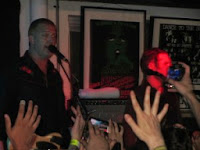 Josh Homme clearly thrives on that interaction with the crowd, although he's probably not used to them being quite so up close and personal.  Throughout the set, he banters with the crowd, he asks for requests, he shouts out to the people outside who came along on the off chance of getting in but didn't.  He repeatedly thanks people for coming, for their love of music which saves him and us all and tells us that he used to want to "fight, fuck and get high" and how he now just wants to "fuck and get high" because of music.  He has the crowd completely in awe.

The set-up is quite unusual as well.  The vocals are through the PA, but it sounds like the rest of the equipment is just through the amps.  As they crank the volume up there's a risk of blowing the amps, but as with asking for requests, you sense this is part of the thrill for them.  It also perfectly fits their sound and the occasion, Josh's vocals sometimes being rendered indecipherable by the guitars.

They mix their set up too, opening with My God Is The Sun from the new LP and include a few more tracks from it before finishing it with a drawn-out blissful I Appear Missing.  They don't just restrict themselves to new material though, treating us to Monsters In The Parasol from Rated R and Make It Wit Chu from Era Vulgaris amongst others.

The crowd sing along to every word, even the new material, which on first listen hasn't lost the edge of their earlier work despite a six year hiatus on solo projects.  It's a rare treat for a band of this size to play a venue this intimate and the whole thing is a huge success because they take it seriously and they have that bond with their audience that many bands crave but never achieve.  And of course, they sound fantastic too.
Posted by Even The Stars at 09:39

Email ThisBlogThis!Share to TwitterShare to FacebookShare to Pinterest
Labels: Queens Of The Stone Age