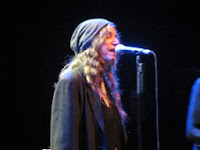 Patti Smith has returned to the UK for a short tour ahead of her music and poetry performance as part of Yoko Ono's Meltdown at the Royal Festival Hall on Friday.  We caught the first of two shows at London's Shepherd's Bush Empire.


The word legend gets bandied around way too often these days that it’s lost its meaning.  Patti Smith is probably one of the few musicians that deserves that accolade, but let’s call her an icon instead.  She’s one of the few musicians that has to their sixties without their credibility diluted - even the likes of Jagger and McCartney are now seen as parodies of their former selves, living on past glories.  Whilst you can’t put last year’s Banga album up on the pedestal from which Horses and Easter survey pretty much every single female-fronted band since, it’s still a ferocious statement of existence from a 67 year old.

Almost embarrassingly, this is the first time I’ve seen her live apart from a few songs at her curation of the Meltdown Festival in 2005 and there’s a great sense of expectation as she takes to the stage to a crowd that’s noticeably from a wide spectrum of ages from teenage kids decked out in Horses shirts to grizzly old punks who were there first time round.  They’re united by a sense of awe and hanging on her every word. 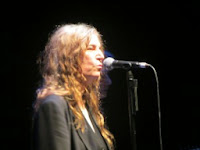 There’s a lot of contemporary references during her set. She makes a habit of dedicating songs to people including Amy Winehouse, Polly Harvey and Kevin Shields.  She also makes a very forced point by spelling out Pussy Riot at the end of Land when she shrieks “Jesus died for somebody’s sins but not mine”.

She also takes the time to explain some of the stories behind the songs.  The reaction she gets is astonishing, people hanging on her every word and you can see that she’s still taken aback by that after all these years. Some of her attempts to interact with the audience are a little awkward and you have to conclude at points that she’s tiptoeing a very fine line between genius and being a little barking mad, particularly when she chooses the O2 Shepherd's Bush Empire to rail against corporations to those in the front row who got in early via their mobile phone contract or when she encourages the pretty much wholly white crowd to sing with arms raised “I’m a n*gger”.

Musically, Lenny Kaye, her old sparring partner and accomplice, is on fine form on guitar and vocals and is given the chance to lead a medley of tracks half way through the set while Patti wanders off stage to relax.

Vocally, she has an incredible power still, whether it’s in the more evocative emotional moments of Redondo Beach or where she’s lost in the chaos of the moment as set closer Land segues into Gloria.

The set she chooses covers most of the touch points of her career with four tracks from Banga and with Horses best represented from the back catalogue and it’s the tracks from that which are best received.  However, the quality doesn’t drop away significantly, as it does with all but a few people still doing it after all this time, when the set moves towards her less successful albums from the 1980s and the turn of the century and the newest material, particularly on standout Banga tracks April Fool and This Is The Girl. 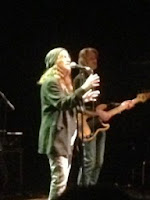 Patti is a one-off now in a world of sanitised imagery in the music business where someone wearing their pants half way down their backside, their cap on sideways and muttering incomprehensible garbage about their bitch can be classed a legend by kids on a bus playing their latest dirge through a tinny mobile phone.

The likes of Harvey and Winehouse who she name checks could only dream of the influence she’s had, and still has, over some of the best known names in the business and the welcome resurgence of strong dominant women fronting bands in the past few years.

And, at the ripe old age of 67, she still looks and sounds every bit the ultimate riot girl.

This Is The Girl

Beneath The Southern Cross

Pissing In The River

People Have The Power

Patti's official website can be found here.
Posted by Even The Stars at 22:37