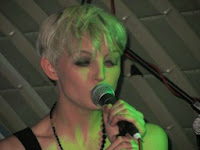 
This is the first time I've seen Section 25 with their new slimmed-down line-up.  They're now operating as a four-piece with founder member Vinny Cassidy on drums, Steve Stringer on guitars, Beth Cassidy on vocals and keyboards and newcomer Joanne Cassidy on backing vocals, keyboards and percussion.

This line-up, like their music, represents the past, the present and the future of the band.  It's also potentially their problem - their history means they're not going to picked up as a new band, which they are in some ways, yet the presence of Beth and Joanne in the band is going to put off the Factory purists too ignorant to actually consider that Beth fronting the band is continuing and enhancing the musical legacy of her parents rather than diminishing it in any way.  Dark Light is one of the albums of the year and deserves much more than the cursory recognition it's been given in the music press. 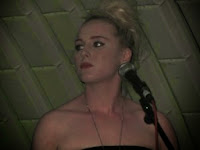 Live, Section 25 are naturally looser than they are on record.  Tonight's set is heavily focused on Dark Light with seven of the eleven tracks coming from it.  Joanne's presence seems to have freed Beth from the responsibility of most of the vocals and allows her to move around the stage a lot more. She also rescues her during the first song Beating Heart when the mic cord falls out and they have to improvise their way through it.  The song encapsulates everything that's so great about this line-up.  Beth wasn't born when it was first recorded yet it feels contemporary and more relevant than some of the new bands of a similar genre that are being hyped up by the music press looking for the "next big thing".

The Dark Light songs prove conclusively though that they are, at this stage of their evolution, a band of the now more than they are of the past. Colour Movement Sex And Violence should be the upper benchmark for anything classed as electronica.  It's dark enough to pass the alternative test yet has enough "pop" elements to it that it could, and should, be played by radio.  Live, it takes on a new lease of life, freed from the constraints of studio production.  Vinny and Steve aren't the obvious focus of the band, but they provide a ferocious yet robust frame for the songs. 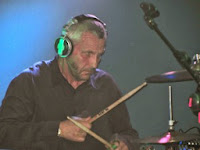 The Record Store Day single, My Outrage, is another song that should be getting them more exposure. When Beth yelps the chorus line "you're so bloody beautiful" it's a moment that could send a generation of young hipster boys weak at the knees if only they were cool enough to get this. Inner Drive, which was coupled with Colour Movement Sex and Violence on their 2011 Invicta EP and on the new 10" Invicta Max, features Vinny's debut on vocals and his gruff no-nonsense delivery offsets Beth's excited darting interjections perfectly.

The great thing about Section 25 today is that they've cast off that dour, dark and depressing image that Factory bands of the eighties have been associated with and which, given the fact that Larry and Jenny are no longer with us, it would be understandable if they didn't shake off.  Watching them is a joyous experience these days, a celebration of their past but also a confirmation of a present and a future that's producing vibrant, exciting relevant music in an environment that's not conducive and supportive of it. 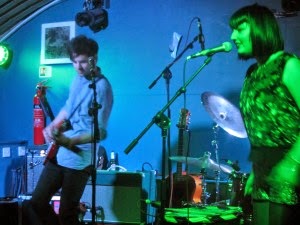 The opening band for the evening were a very promising two-piece Pony And Trap.  They are vocalist and percussionist Sally and guitarist Tom and both of them are at music college in York.  They describe themselves as "post-punk alternative" and, with the help of some clever use of loop pedals on some songs, they produce a very clever, exciting loud sound that's quite innovative for the resources they're working with.  Sally's part-spoken, part-sung vocal style draws you in, particularly on stand-out track John Green, whilst Tom's guitar playing betrays his eighteen years.

They're aiming to secure a slot at Reading and Leeds Festival by winning the Centre Stage final at Leeds Academy on the 17th July.  As well as trying to secure that opportunity, all the proceeds from the demo CD they're selling at the gigs goes to Martin's House Children's Hospice near Leeds.

Email ThisBlogThis!Share to TwitterShare to FacebookShare to Pinterest
Labels: Pony And Trap, Section 25