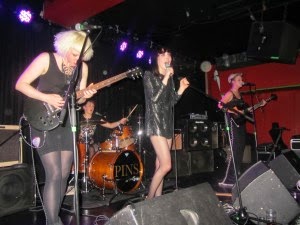 PINS defy the Manchester stereotype of boys with guitars and prove themselves as one of the most vital bands coming out of the city and more than a match for the more celebrated all girl bands from London and California.  We saw them play the Lexington in London ahead of the release of their third single Stay True.

Brown Brogues opening for PINS is a bit of an unexpected treat.  Their debut album Born To Lose is one of the underground secret successes of the year. You see the drum and guitar approach with both Mark and Ben on vocals and the immediate thought is White Stripes, but their approach is much cleverer than that.  There's the two vocal mics and guitar put through the pedal to devastating effect, fighting against an incessant drum beat.  It's a bit too intense for a lot of the crowd who look on slightly bewildered at points, but for those that get the wall of sound with almost indecipherable vocals at points, it's a genuinely thrilling balls-out in-your-face sonic assault. 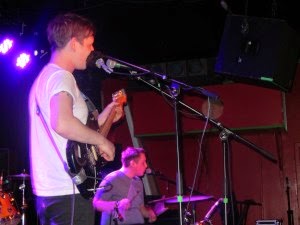 Like all great bands though, they're already moving on from their last release within a few months of it coming out.  They play two new songs tonight that seem to be showcasing a slightly mellower side to their repertoire, difficult as that might be to imagine with the guitar and drums only set-up, with some intertwining vocals that you could almost call harmonies if you hear them punching through that onslaught of guitar and drums.  They're utterly brilliant, practically indescribable, that sort of band that the late John Peel would absolutely adore, play to death, that everyone would love, but no one else would play on mainstream radio.

PINS have a problem. Coming from Manchester, they don't fit the baggy-haired, floppy-fringed mad-for-it stereotype of the 1990s, nor are they the honest, down-to-earth, genuine songwriter of the Guy Garvey / John Bramwell ilk.  They're also not from London or California, so they don't get the cool cache and saviours of female guitar music that's been attached to the much-less-worthy Savages and Deap Vally.  They're also probably not signed to the most appropriate label in the world, magnificent and the most genuine supporter of truly brilliant music that Bella Union is. 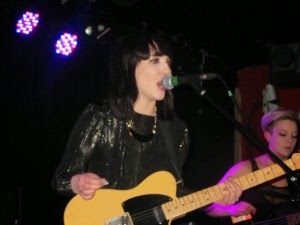 However, and without wanting to descend into the gender matters dickheadness of the bloke who shouts out "any time love" when Faith introduces double A-side of forthcoming single Get With Me, they are the most exciting all-female band in the country right now.

There's not a single song in their eleven-song set that dips below the standards of their last single LUVU4LYF, which bodes well for their forthcoming debut album due later in the year. They've lost the media impetus that Savages gained with the hype of their disappointing debut by biding their time, honing their sound and settling on this line-up, but what PINS have is a development of that early promise into a set of songs that will form the basis of one of the best, if not the best, debut album of the year.

The addition of Sophie on drums makes them look and feel like a proper gang, particularly when all four of them are singing in unison on penultimate song Girls Like Us. There's a mix of the familiar songs - both tracks off their limited edition cassette Shoot You Down and Eleventh Hour, the aforementioned LUVU4LYF and the equally stunning Say To Me from that EP, which features a threatening brooding bass and lead guitar line from Lois and Anna as well as the two tracks Stay True and Get With Me from their next single and a number of unreleased songs. 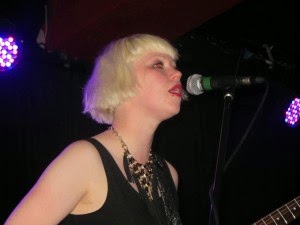 Faith jumps about excitedly through most of the set whilst the other three ooze effortless distant cool.  Girls will want to be them, boys will want them, but at the same time be terrified of being eaten alive by them.  Faith ditches the guitar for a couple of songs and makes her way to the front of the stage and at that moment she resembles the alternative female icon to the anodine Florence and her machine.

PINS are simply the most exciting new guitar band out there at the moment.  Male female, British American, they have none of the hype being piled upon much lesser bands, but already have a set of songs to win you over and that dark, mysterious brooding personality that draws you in.

PINS official website can be found here.  New single Stay True can be downloaded now and is available on 7" single from Bella Union on 22 July.  They are on Facebook and Twitter.
Posted by Even The Stars at 09:51