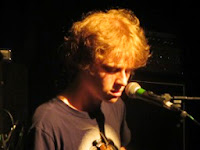 In the corridors of the internet where the wise sages of music chatter away there's been a growing buzz about Kiran Leonard, still a teenager from North East Manchester, who has released a couple of internet-only singles and had posted early mixes of his forthcoming album Bowler Hat Soup on his Bandcamp page.  Tonight was his debut London show, a support slot at The Lexington.  We went along to see what all the fuss is about.

It's a very rare occurrence to see an act that stuns an audience into silence, it's even rarer that this happens in London, but it's immediately what Kiran achieves, aided only by an electric guitar with strings hanging off it. The second song is a new one, despite Bowler Hat Soup being months away from release, and Kiran casually throws in that he might mess the lyrics up as he wrote them on the train down from Manchester that afternoon.   Musically, it doesn't have much of a tune to speak of, it's more a piece of aural art over which he stretches his voice to its limits.  The lyrics jump from theme to seemingly unrelated theme, there are hints of some of the more challenging off-kilter bands of his hometown, think The Fall, early James, New Fast Automatic Daffodils, without ever aping or sounding like any of them.

He's not afraid to reinvent his own songs either.  Sea Eyes, off Bowler Hat Soup, sounds like a very different beast over its minute and a half than the album version. We then have a discussion about food in The Lexington bar, joking about the vegetarian fritter option still being tasty, which moves into an explanation of one of his twenty-four minute songs The End Times, which he doesn't play, but his follow-up piece After The Rain Came is written about the day after the Mayan apocalypse didn't happen.  It starts as a laid-back strum but ends up flying off at a number of tangents, his voice stretching the already chaotic elastic guitar to almost breaking point.

Although Bowler Hat Soup isn't released until August, it was actually finished last year and Kiran's fertile songwriting mind, which has already yielded a number of EP's and mini-albums, has moved onto recording the next album. Caiaphas In Fetters is from that next record.  It instantly sounds like nothing he's done before, yet is unmistakably him.  It should be completely inaccessible, but it is utterly compelling listening. 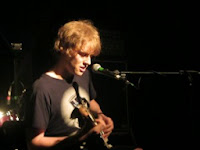 Kiran explains to us that the next song, Dear Lincoln, usually has keyboards and percussion, but as he's on his own, he's just going to thrash it out rather than play it slowed down and acoustic.  At this point, you think back to 1970s punk or early grunge, no mean trick for a teenager from Manchester armed only with an electric guitar and a set of vocal chords that are tested to their very limits.  It lasts less than two minutes.  Not content with forging his own sound musically, he disregards the usual rules about song length without them sounding curtailed or unnecessarily extended, whether they last a minute or twenty-four.

Brunswick Street is an observational tale which veers from soft, almost acoustic, strum to banshee howling.   Final track Smilin' Morn makes similar leaps, translated from a piece with a piano lead to minimalist guitar at the start, building to a crescendo of noise, over which that voice stretches then contracts. His stage presence and between song banter is almost as enrapturing as his music.

He tells us how he's made some CDs for sale and because his printer wasn't working, he's hand-made covers on the train, each with a unique title and newspaper cutting. He goes to his bag to show us them and can't find them. It is moments like this that makes the future for Kiran even more intriguing.  Mancunian teenagers don't talk about Korean octopus and clumsily scrabble in a bag for homemade CDs.  They certainly don't make music like this.  No one does.

He's a complete one-off.  Traditional song structures are completely ignored. You feel he might implode under the weight of his own creativity or sheer volume of ideas or whatever's going on his mind that brings out the stories he tells. You can imagine that no two gigs will ever be remotely the same.
Bowler Hat Soup is already the singularly most exciting, off-the-wall release of the year and for many years previous, but it actually makes perfect sense if you have the concentration span to dive into it and explore it.  Kiran is a phenomenon, a complete one-off and his live show is something you have to experience to comprehend what a genuinely unique talent he is, and you feel this is just the start.

Kiran's Facebook page can be found here.  His songs can be found on Bandcamp.  The album Bowler Hat Soup is available for pre-order here and released on Hand Of Glory on vinyl only on August 26.
Posted by Even The Stars at 09:49