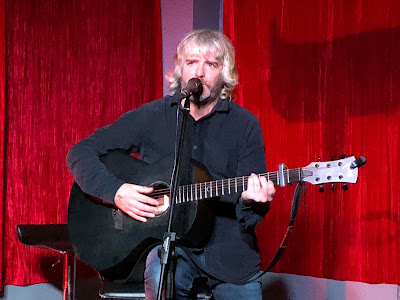 Musicians Against Homelessness are partnered with Crisis and Simon Community Northern Ireland to raise awareness of the growing problems of homelessness on the streets of the country and to help generate funds to support the work of those two organisations. Tonight's gig was organised by Owen Meikle-Williams of After All Festival and featured a series of acoustic acts with one very special guest who'd just a month earlier had played to a full house at The Ritz across town.

You might not know The Lions Den, it's tucked away overlooking Deansgate towards the station and is accessible from the side of the Great Northern Complex. It's an unassuming friendly bar, but when you make your way upstairs you're met with a perfect gig space for both bands, acoustic nights like this as well as street poets. What its location away from most of the traditional venues takes away, it makes up in the way it's set up and run.

John's on fine form throughout his forty-five minute set, telling us he's heading off to Lanzarote for a holiday immediately after the show, something he references repeatedly during the set's many interactions with the audience which are humorous, good-natured and personal enough for the audience member to remember. It'd be easy to turn up, play a pre-planned set, not say too much and go, but John's approach is not to plan and to let spontaneity take over and make each gig a special event in its own right and tonight is no exception.

The songs of course are the real stars though. Even with a borrowed guitar that he's never played before, John's technique, often unfairly overlooked because of the focus on his lyrics, really comes to the fore. He opens with From Your Favourite Sky and the sparse stripped-down acoustic performance somehow feels even more powerful than the recorded full-band version, something that continues across the likes of Mouth On Me, To The Brink (where we're asked to do the accordian solo as John looks around for an accordian player to much amusement) and Over My Shoulder (preceded by the standard question in the crowd of "can you pull off over my shoulder" which is enshrined in You Tube John Bramwell legend from an innocent question at a gig many years back). It never fails to be funny though - and the song is one of John's best creations. 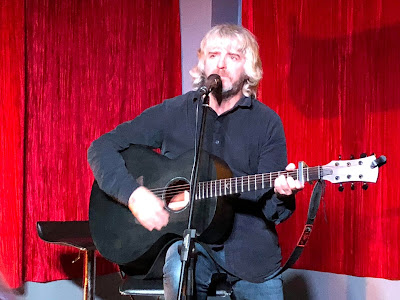 There's references to drinking and disaster, something that dates back years, but which explains why John's lyrics and music touch so many hearts and minds. The songs are about real life emotions and experiences not fantasy and dream worlds. The words resonate with people in the way the very best lyricists always manage to achieve - and one look around the room at people eyes closed mouthing every word tells its own story.

We're treated to a couple of special songs. There's a brand new song called Sky Of Thunder And Lightning that he's working on currently with his new Harmonic Convergence band that bears all the traits of his classic songwriting yet still feels new and different from what we've heard from him before. The excellent sound in the venue malfunctions for a few seconds and we get a blast of feedback which John turns into an impromptu rendition of The Beatles' I Feel Fine much to everyone's delight.

He takes a request for a rarely played song called Avenue Of Hope, which he jokes he might not be able to remember, but his modesty is misplaced as he delivers a beautifully rich and expressive version of the fan favourite, whilst The Same Deep Water As Me is a contender for our favourite song he's ever written (but isn't as catchy as a blog title) as it reflects on the fact that we're all in this together and sometimes knowing that simple reality can be a reassuring arm around the shoulder.

He finishes with one of the earliest I Am Kloot songs To You, a song that rarely features these days even in his solo acoustic songs, and he asks us to join in on the high notes which we do to varying degrees of success. He then stops to talk to the crowd, many not used to seeing such a name artist in such close proximity before heading off into the night to catch his flight.