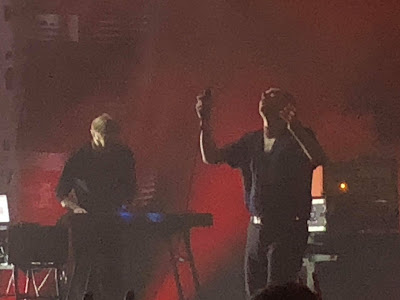 At one point, close to the end of the set, fighting back the tears, James Graham thanks family, friends and those who’ve worked with them over the past ten years plus for all their support that they’ve given this band of underdogs, who’ve kept going against their odds and are now finally reaping the rewards and recognition of their faith that they’ve had since the days of playing to small crowds people in basement venues across the UK.

Tonight is a homecoming, a triumphant end to their It Won/t Be Like This All The Time album campaign, their biggest ever headline show to date (of course Scotland has loved them right from the start, their Barrowland shows something of legend amongst their faithful followers). The Usher Hall, one of the most stunning venues they will have played in their own right is the perfect setting and St Andrews Day feels like the perfect day for them to enjoy their finest hour so far.

Homecoming shows can sometimes be an anti-climax, but neither band or audience are going to let it be that. The sense of anticipation as the intro music rumbles is palpable, the deafening roar as they come on stage and at the end of each and every song something that will last long in the memory of both the band and those privileged enough to be in the room. When James tells us that we’re singing louder than him, then it’s no throwaway statement, it’s testament to the bond that they’ve created over the years and now finally the day in the sun that they’re enjoying after years in the dark.

Often the focus is on James, but tonight the rest of the band deserve the acclaim too (as they always have). The Usher Hall’s acoustics allow us to hear the nuance in the sonic onslaught - Andy’s guitar sound sharp and cutting, particularly on the It Won/t Be Like This All The Time tracks such as Auge/Maschine, Shooting Dennis Hopper Shooting and Videograms, the bass and keyboards of Johnny and Brendan provide shade and detail whilst Seb’s drums provide the punishing beat that drives much of the set forward at breakneck speed and at a volume that dances along the line of distortion with wilful abandon. With a light show that’s powerful yet simple and perfectly atuned to the music it’s helping to animate, it’s both a visual and an aural experience, and evidence that they belong on stages like this.

It Won/t Be Like This All The Time makes up half the set, fitting as it’s been the catalyst for their major breakthrough over the past year, but the likes of Last January, There’s A Girl In The Corner, Seven Years Of Letters and The Wrong Car all show that this ascension has been long overdue. 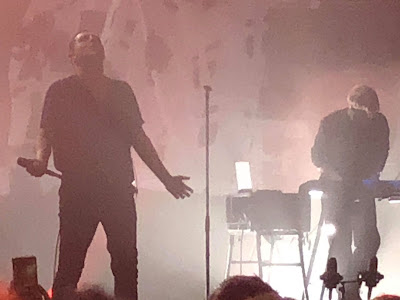 “It’s just another gig, James” he says to himself out loud as he recalls being up most of the night having prepared what he wants to say, although everything has gone and he makes it up on the fly. There’s still a sense of modest incredulity that so many of us are here that makes us warm to him even more. The outpouring of love reaches its crescendo during their tribute to lost friend Scott Hutchison of Frightened Rabbit as they cover their Keep Yourself Warm and three thousand voices provide the choir. At the end, fighting back tears again like many of us, he tells us how much it means to be in a room of people who loved him as much as they do.

Watching The Twilight Sad live is an immersive experience, they draw you into their world, envelop you in their wall of sound and make sure you know that dark thoughts in your head aren’t a sign of madness and that community and love and sharing are the best antidotes. It’s not about the details, it’s about the whole damn thing, the connection, the arm around the shoulder, the strength to open yourself to vulnerability by telling people close to you that you love them and a sense of release.

As the final notes of And She Would Darken The Memory echo out, the feedback from the guitars fill the room, James picks himself up off the floor and stands there in front of us. To paraphrase one of their earlier albums Everybody Wants To Be Here And No One Wants To Leave. It's a perfect finale to a year in which The Twilight Sad established themselves as one of the country's best-loved bands, no longer a secret for those who knew, but a band for everyone and anyone who's willing to let the music take them places and head spaces they might have previously shied away from.

The Twilight Sad played [10 Good Reasons For Modern Drugs], Shooting Dennis Hopper Shooting, VTr, Don’t Move, Last January, That Summer At Home I Had Become The Invisible Boy, The Arbor, I/m Not Here [Missing Face], Sunday Day13, There’s A Girl In The Corner, Seven Years Of Letters, Auge/Maschine, Videograms, Let/s Get Lost, Cold Days From The Birdhouse, The Wrong Car, Keep Yourself Warm, And She Would Darken The Memory