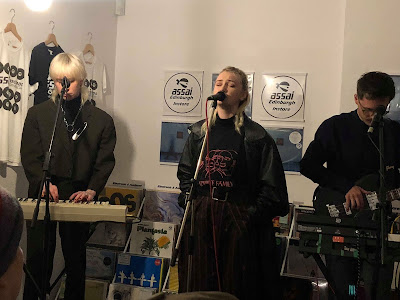 The Ninth Wave completed a run of in-stores to promote their debut album Infancy in Edinburgh's Assai Records on Friday night. A seven song set featured six tracks from the record as well as an as-yet-unreleased track.

The Ninth Wave took the unusual decision to release their debut album Infancy in two parts of six tracks each, the first part in spring and the second half and a physical release of the whole record now. It's allowed them to build a following for their dramatic live performances - but tonight, as they mention, it feels special because they can see our faces and there's nowhere to hide behind the distance from stage to crowd and the darkness of a live gig.

The songs though mean that they have no need to shirk, starting with singles Human Behaviour and Sometimes The Silence Is Sweeter, led by Amelia's vocals with Haydn and Calum providing the backing vocals. As the set progresses the three of them interchange bass and keyboards - across Everything That You Have Ever Left, Unspoken, a new song that's not available anywhere that Haydn tells us to "pay attention" to, Flower Into Wounds and the final track Used To Be Yours - something that keeps the set fresh and gives each of the songs their own unique character and personality. 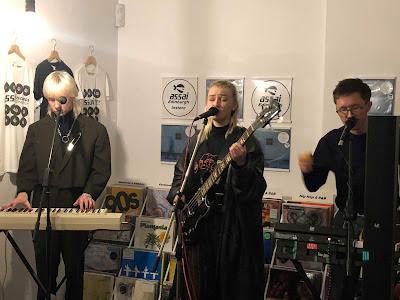 Between songs they engage by joking about constantly having to tune, forgetting to set their recording of the set off because Haydn had a couple of wines earlier and pausing before the final song to turn the tape over. It's an unnatural environment for a band that's so visually striking when they play live, but one that doesn't faze them at all. When they're done fans queue for a chat and to get their indies-only red and blue vinyl signed having experienced a band succeeding outside of their natural environment and the songs from Infancy standing on their own two feet.

Email ThisBlogThis!Share to TwitterShare to FacebookShare to Pinterest
Labels: The Ninth Wave