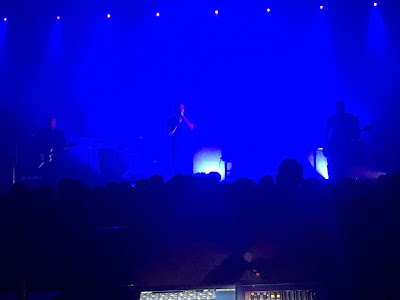 On the back of the success of their album It Won/t Be Like This All The Time, The Twilight Sad have returned from a huge European tour to play three of the biggest headline gigs of their career so far. Sunday night and an early start saw them successfully move from their two sold-out gigs across the road at Gorilla to this legendary venue.

Man Of Moon open up proceedings and whilst they've been brought on to the tour as part of The Twilight Sad's commitment to support their friends in bands that they love, they more than dispel any notion of not being worthy of such an honour with a forty-five minute set taken from their EPs and their forthcoming debut album due next year. The Ritz is a big space to fill, and with just the two of them, it's a big ask, but one that they fulfill with a robust and bold sound despite the limitations of just drums, guitars and vocals. 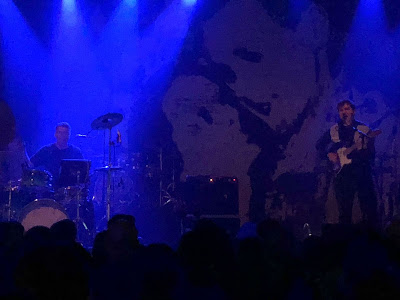 Ride The Waves and Skin, the two singles from this year's Chemicals EP are stand-out tracks, but the unreleased Strangers and Rust give very definite pointers that they're not prepared to just produce variants on a theme, but to give us something that's varied and which will hold our attention. The performance has a real edge and energy to it, assisted by lighting that's sparse and helps create an edgy backdrop to their raw sound. They go down a storm with the Twilight Sad devotees down the front and the gathering crowd's response to them grows throughout.

These are big shows for The Twilight Sad. They have of course supported The Cure through 2016 in stadiums around the world, but in many senses the pressure was off them, but tonight they're in the headline slot, in a venue twice the size of anything they've played in this city before, something James recalls when he fondly reminisces about their first Manchester show in the Castle back in 2007, and people are waiting and wanting to be impressed.

The crowd is an enthusiastic one, the front rows all seem to be on first name terms, brought together by the cathartic nature of The Twilight Sad's music - and you sense that connection most strongly when James asks us to sing Frightened Rabbit's Keep Yourself Warm "together, because this is important" before it and tells us "it makes everything better" at the end of it. To stand further back and watch the performance rather than be lost in the heaving front pit rows, you take in just how much this music means, to its creators as well as its audience, as James falls to his knees bathed in yellow light at the end of Let/s Get Lost or punches the air in a mix of delight, relief and still being here to fight another day at various points in the set.

Any doubts that the size of the venue might faze them are very quickly put to bed as they start with a trio of songs from It Won/t Be Like This All The Time - [10 Good Reasons For Modern Drugs], Shooting Dennis Hopper Shooting, VTr - and the sound reaches every corner of The Ritz and the infamous bouncy dancefloor gets a workout. They sound huge, aided by an impressive yet modest light show that really accentuates the power of these songs, yet there's no loss of the intimacy of the smaller venues which they've worked their way through in the last dozen years to get here. 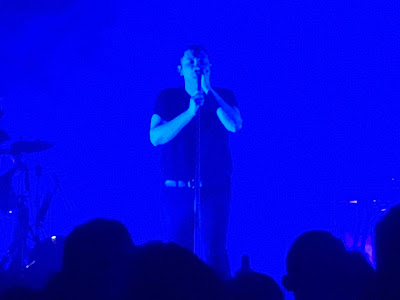 When they delve into the back catalogue, like for That Summer At Home I Had Become The Invisible Boy from their debut album Fourteen Autumns & Fifteen Winters or Seven Years Of Letters from its follow-up Forget The Night Ahead, the lineage and development of the band is very clear to hear - whilst their traditional set-closer And She Would Darken The Memory feels bigger and more emphatic than ever before, particularly as there's several minutes of feedback as the band leave the stage and James stands there punching the air and soaking in the adulation and sending it back out to the crowd. It's a symbiotic relationship that is right at the heart of why music is so vital to so many people.

There's moments of dry humour too. A technical hitch means there's a pause a few songs in, James laughs off a shout for an acoustic version because Andy hates them and then leads us in an X-rated happy birthday singalong for their merchandise man JP and also chastising himself as not being Dizzee Rascal when he uses the word bonkers to describe the feelings they're experiencing during the show.

Those feelings though are genuine and so much deserved, the triumph of The Twilight Sad is one of the underdog, of a band that had been written off as a minor concern by the music press and who lived on "word of mouth" and of the real connections that can be made between artists and their audience. "I'm fucking happy to be here" James tells us early on in the night - so was everyone else in the building as they wrote another chapter in one of the most warming and richly deserved success stories of recent years.

The Twilight Sad played [10 Good Reasons For Modern Drugs], Shooting Dennis Hopper Shooting, VTr, Don't Move, Last January, That Summer At Home I Had Become The Invisible Boy, The Arbor, I/m Not Here (Missing Face), Sunday Day13, There's A Girl In The Corner, Seven Years Of Letters, Auge/Maschine, Videograms, Let/s Get Lost, Cold Days From The Birdhouse, The Wrong Car, Keep Yourself Warm and And She Would Darken The Memory.

Email ThisBlogThis!Share to TwitterShare to FacebookShare to Pinterest
Labels: Man Of Moon, The Twilight Sad