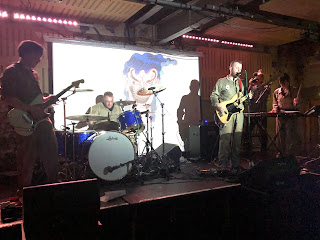 Hello Cosmos launched their Let Love Be The Island Upon Which We Stand EP with a Thursday night gig in the basement of Manchester's Soup Kitchen supported by local heroes LIINES and Granfalloon.

Usually a five-piece live band Granfalloon are stripped down tonight to a one-piece front man Richard accompanied by an array of effects and loops pedals as well as a guitar and an omnichord called George. He performs mostly tracks from their new album RGB, but opens with Sleep, a pointed song with a message that talks about "a love song for Daddy, a love song for Jesus and a suicide note to the DSA" to give the song an edge. Despite performing solo, it's an edge that runs throughout the performance, at points you look at him lost in his own world, eyeballs retracted to the back of his head, lost in the moment. 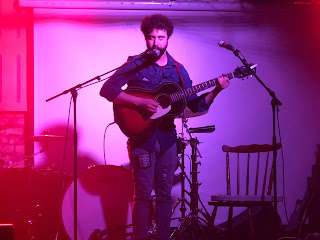 His ridiculously early set time means the venue is filling up as he performs, but the crowd's attentiveness never really wavers through Lysistrata, Broken Things, Ambulance (which he notes he co-wrote with his Gran) and the final track Year Of The Rooster, which he tells us is the first time he's played without the band, but once some equipment issues have been dealt with, we wouldn't have known if he hadn't told us. Good-humoured with a sharp sense of wit throughout, the crowd warm to him as the set progresses - drawn into the intensity of the songs.

LIINES are next up and they've filled the room up considerably for what for them now is a more intimate show. Zoe's struggling with a chest infection, as she tells us numerous times throughout, but she battles her way through it as they deliver a full fourteen-song set with precision and power. There's something about them in these smaller venues that makes them even more exciting, the edge to them a lot sharper and the power that starts from Leila's whirlwind of arms drumming out the pulsating beats of these songs more exhilarating. The rewards of their success and non-stop gigging this year are clear for all to see - they're very much an united unit, knowing their moment, understanding where the others can take the songs and coming together to blast away the audience. 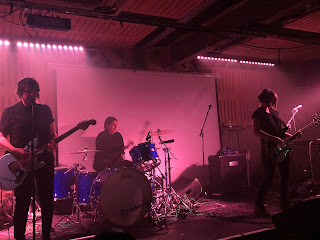 There's plenty of new material too. Keep On Going, Another Start and Look For You all scream out single at us to follow the breakthrough of On And On earlier this year and Sorry and Choke hint at a harder edge to their sound now Tamsin is aboard as a writer and their set-closer I'm Not Afraid uses repetition of the title phrase to make its indelible mark on us as their forty-five minutes draw to a close. The crowd love them, as most people do once introduced to them in this environment where they're most at home - and it was great to see them for one night back in the venues where we fell in love with them five years ago.

Hello Cosmos are loud, blisteringly loud, so much so that for the first part of the set, the crowd take refuge towards the back of the venue and only venture tentatively forward when Ben beckons us forward half way through their nine-song set. You sense a real joy in their performance, from the boiler suits they're dressed in and their colourful video that runs in the background on a screen, Ben grinning when he's not fighting through the wall of noise with his vocals, through Adrian's bass, Simon's drums and Angela on keys and "fifteen other instruments." He tells us it's a big thing to be making music in your late thirties, when bands are often deemed too old or too uncool to be successful, and acknowledges that the audience have come out to listen to live music, turned off their twitter and got involved. 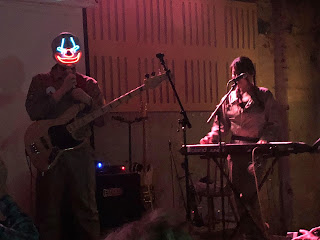 It takes time for them to draw us in, the volume being probably the biggest inhibitor, but once you can hear Angela's violin and the more subtle elements of her keyboards, the songs crystallize and start to make more sense. The EP's title track is dedicated to his wife Roxy, but Ben explains it's taken on new meaning with current affairs at present and that strikes a chord. Previous single Run For President is a real crowd pleaser towards the end and as they finish with Dream Harder and Ben lies on his back half-singing half-preaching the words of the song, they've taken the audience on a winding trip round creative ideas laid down to sate wandering minds from the day to day of life rather than to make money. And it's a great space in which Hello Cosmos exist.