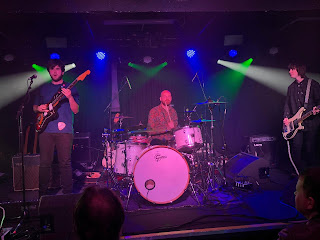 Déjà Vega took time out from selling out ever increasing in size venues across Manchester to support Honeyblood at Academy 3 on Friday night. A typically energetic set won over a number of new followers despite technical problems that almost curtailed the set - but across the course of half an hour, they showed just why they're one of the hottest live properties in town right now.

It seems strange now to see Déjà Vega play in a room that's not full. We couldn't have said that twelve months ago, but their stars have aligned to match the ferocious intent and purpose of their shows. It also means they've become an attractive support act for touring bands - like Honeyblood tonight - in venues that are, and we question this about Academy 3 as we leave given their upward trajectory - at the moment larger than the ones they're laying to waste at their own shows.

Tonight's meeting is brief - the constraints of being a support act restricting them to just thirty minutes and the unenviable choice of whether to promote their long-delayed self-titled debut album or to reveal tracks from their second album which seems set to go at some point in the second half of next year. They choose a route that allows them to showcase both - to a mix of hardcore Déjà Vega fans (and we'd made a last minute decision to pop in and see them en route to another gig) as well as intrigued Honeyblood fans who'd lined the barrier ahead of time for their set.

They start with Mr Powder, a perfect introduction to their sound, Jack shredding his guitar with a face like he's going to rip off anyone's head who gets in his way - such is his manner as it looks like every ounce of energy in his body is being channeled into his fingers to deliver the song. Mike and Tom seem unperturbed by this, but their contributions to the sound are every bit as vital even if they are far less visual.

It's followed by three new songs - Spitting Gas, No Shalom and Who We Are - each of which possesses qualities of their own whilst retaining the indefatigable spirit of this band. They're tight as hell, yet it comes from an intuition between the three of them, knowing glances, mouthed comments, rather than practising one way of playing the song and never deviating from it. No Shalom is biting and angry, whilst Who We Are is a song of many parts, each of them revealing a layer of a different style that they take and craft into a potent mix of their own, moving abruptly from one part of a song to the next seamlessly causing a real frisson of excitement as they do as it's unpredictable even when you've heard the song before. 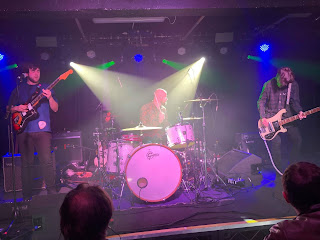 Eyes Of Steel is beset by technical difficulties as Mike's bass amp packs up and flustered attempts to fix result in nothing until the venue staff save the day. Rather than stop, Jack and Tom jam whilst the repair attempts at being made, which gets a huge roar of appreciation from the crowd. It does disturb the song's building energy somewhat, but these days they have the raw power and force of will to reclaim it.

The issues mean that their final song The Test is curtailed slightly, the one disappointment, but such is the nature of the track and what they do with it that it always feels unique. Its relative brevity means that it's even more fast and furious than usual and that they keep eye contact to ensure that it's still heading in the same direction. The crowd at the front lose themselves in it as they build and build the wall of sound that is the foundation of this track that feels like the one immovable object in their canon of songs. And then they're gone.

It'd be no extrapolation to suggest that they'll be back in here themselves at some point next year although the signs point to them jumping to somewhere bigger like Gorilla such is the exponential rate at which their star is currently rising. Tonight shows that the step up is something they'll be able to take easily in their stride.