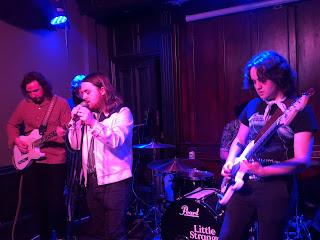 Little Strange headlined a packed out Castle Hotel music room in Manchester on Saturday night. The six-piece trade in a mix of psychedelic and traditional rock and roll sounds and won over an audience with a forty-minute set that appealed to both their die-hard fans and those like us watching them for the first time with no prior knowledge of them.

A six-piece band has a number of issues on a stage of this size - the first is fitting themselves on it and the second is how to create a sound that makes full use of everyone's talents and allows each of them to be heard. At times the three-guitar plus bass and drums approach threatens to overwhelm Jamie's vocals, but they're sage enough to get it just right, restrained yet powerful enough to deliver the rhythm and the grooves in the songs and allowing him to deliver the likes of Cosmic Girl and recent single Let Me Go and the emotion of the words to come through the sonic storm his bandmates have created.

They wear their influences on their sleeve, enough to draw you in but far from the line of pallid imitation that many cross too often - shades of T-Rex and The Rolling Stones light the path, but their musicianship decides the way down which they're going to lead us, and this six-piece manage to sound tight yet fluid in their delivery, confident and assured without having to resort to showmanship and fake gestures and statements.

There's more warmth when they bring synths, particularly on the slower Blue Boy half way through the set, and harmonica into the mix as the set progresses. They finish on a couple of crowd pleasers Alright Now and the final Black Lust, their encore that wasn't an encore, where they end up in a jam that shows that there's real substance behind their art.