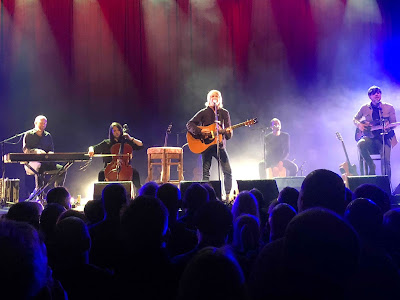 John Bramwell brought his Full Harmonic Convergence to Manchester Ritz on Thursday night for the second of two special shows to reveal tracks from his second album due next year sometime as well as old favourites from his I Am Kloot catalogue and his Leave Alone The Empty Spaces debut.

Dave Fidler has been touring with John Bramwell for what seems like an eternity now, and features in The Full Harmonic Convergence later, but it's testament to his songwriting skills and his personality that John's audience never appears to tire of him. He's struck out more on his own this year with the release of his Songs From Aurora album and his own headline tour with his band, but tonight is just a stripped down solo set featuring songs from that album and his debut I'm Not Here.

The songs are strong enough to fill the room and hold the audience's attention, no mean feat for a solo performer opening up an event of this size, but three tracks from Songs From Aurora - On The Line, Let Her Go and Water - have the power to fill the room, even just with an acoustic guitar and voice, testament to Dave's timeless songwriting craft and lyrics that tell a story and grip the listener's attention and don't let go. 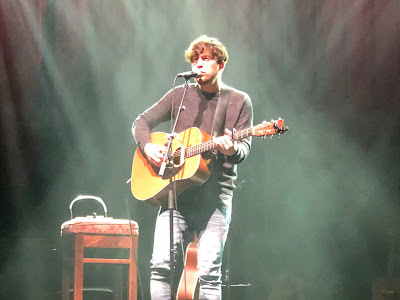 He moves back to his debut I'm Not Here for a rich deep and emotional Easy Gone Easy Come dedicated to his "future world changer" son Dylan and Reassured, which he dedicates to his sister. It's this family feel to his music that draws many in with its personal touch and genuine emotions.

He concludes the set with his Tommy Emanuel tribute Tommy that shows off his instrumental finger-picking skills and Songs From Aurora's lead single Skylark, a song that sees him spread his wings a little and create something that wouldn't feel out of place on daytime radio as well as in a small acoustic club. It's that breadth of potential appeal that sees Dave so well-respected both by his peers and tonight by John's appreciative crowd.

The Full Harmonic Convergence set starts with an improvised instrumental by Al on keyboards, Harriet (or the Big H as she becomes known) on cello and Dave Fidler on bass. With a stark sparse backdrop, it sets the tone for the evening - removing expectations of an I Am Kloot heavy set and making clear that this is going to be a revelation of new material, the phrase "this is a new song" being the most used of the evening. And whilst this might be most crowd's nightmare scenario, wanting the songs they can sing along to, the Ritz crowd listen, drink in the boldness of the new material that seeks to challenge the audience and their preconceptions about where John is now.

Three new songs start off proceedings - each of them possessing the songwriting craft that has seen so many fall under John's spell, but with this band it's a broadening of horizons, exploring the possibilities of the songs further, adding tension to them that's black and white in much of Kloot's work, but here with much more light and shade and interpretation than before. World Full Of Flowers is wistfully romantic, but with a sense of optimism lingering in the background that things might just work out whilst Element Of Truth is hard-edged, stop-start and full of tension, different to anything he's done before, but also familiar. Leave Alone The Empty Spaces is a highlight of John's debut solo album and here its title track is fleshed out by the Harmonic Convergence, beautifully affecting and more proof that John is on a creative high at present. He's not short on his usual off-the-cuff humour, as well as his tried and tested jokes that he commends us on not filling in the punch line for him as he tunes his guitar and tells us artists might normally panic at it refusing to tune as he likes but not him because he's got his cash off the promoter already. 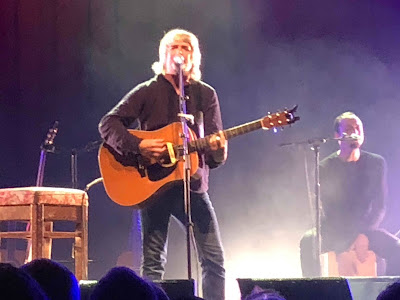 It isn't just an evening of new music though despite the nine new tracks making up a third of the mammoth set. There follows a series of I Am Kloot songs that benefit from the addition of cello and keys and the subtlety of Andy's cajon rather than the power of drums. The Moon Is A Blind Eye is wistful, ridiculously romantic with dark tinges, Bullets sharp and cutting, The Same Deep Water As Me drenched in despair and emotional epiphany whilst 86 TVs sees them sound, as John says, like a "psychedelic folk band." It's an interesting description, but one that feels very valid as they take songs that are well-loved by everyone in the room and twist and turn them, breathing new life into old favourites without losing the essence of the original. And they look, John in particular, like they're having the best time doing it - it's a long time since we've seen him this comfortable on stage yet without losing that edge that always existed over the past twenty years.

It's then back to the newer material and once again the audience's attention is focused on the stage rather than their conversations as Days Go By departs as quickly as it arrived, one of John's sub-two minute compositions that feel like they last much longer. He tells us how he was stuck on the song until the line "I hesitate, I meditate, I turn my mind off and levitate" appeared in his head - he loves the line so much he gets Andy to help him reprise it. That camaraderie and good humour extends into Leave No Traces where John asks Dave for the key, then tells us he can play it in any key, he's just forgotten which key the band had learned it in and they all laugh together and Time's Arrow where he mimes a conversation with Al on keyboards. Yet again, the songs demonstrate that John's songwriting star is still very much in the ascendancy, his ability to capture thoughts and feelings and translate them into something that everyone can relate to is a rare and magical one. Another "brand new song" The Ocean has hints of funk to it, the band letting loose a little and a sign that there's more musical adventure in the forthcoming record than in John's debut.

The band depart for a well-earned break, or a "crafty fag" as John puts it while he performs a short seven song solo section that focuses primarily across the I Am Kloot catalogue from Bigger Wheels from Natural History through to Mouth On Me from their final studio album Let It All In, on which the crowd help out with a lusty singalong.  In between those From Your Favourite Sky again touches on that battered and bruised romanticism that makes John one of the city's most loved songwriters, At The Sea is so fragile that you can hear a pin drop between bars whilst Astray looks back at the rock and roll lifestyle and turbulent times of John's youthful life in a band. The solo section is finished by Meet Me At The Station from Leave Alone The Empty Spaces, and the story of how John's dog beamed the song to him when he had writer's block on it - and it demonstrates just how John can turn what on first glance is a simple unassuming track into something that has you thinking it will make you cry. 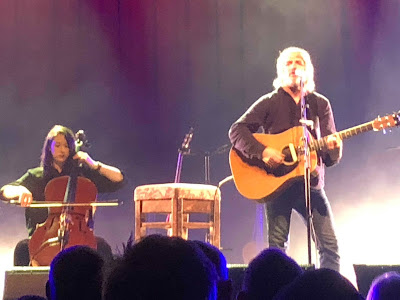 The band return and Sat Beneath The Lightning Tree, another highlight from Leave Alone The Empty Spaces, has its colours filled in by the added instrumentation, evocative and descriptive and adding light and shade to the words. Who Is Anybody picks the pace up a little and allows us to air our voices to sing with Dave, John and Andy as it reaches its conclusion and the instruments drop out leaving just a thousand vocalists.

John invites his friend Nigel on stage to play Mouth Organ on Proof, taken from its usual place at the end of the set, but which once again has us threatening to drown him out. The false entry into the first chorus leaves John beaming as it often does - and it feels like a payback for all the attention that the new songs have been granted by the audience. There's more singalong moments on To The Brink where the waltz-like breakdown is sung back to them like some sort of communal coming together and admission that we're all a bit messed up and we should celebrate that. It's something that's on or very close to the surface on a lot of these songs.

Recent single I Am The Sky is the first of three more new songs which include Stepping Stones and Corporation showing that The Harmonic Convergence project isn't going to just be reflective, but will contains songs you can move and join in on. Northern Skies sees Nigel return, and one final singalong as we pay homage to the stars above us.

John Bramwell and The Full Harmonic Convergence played Sky Full Of Thunder And Lightning, World Full Of Flowers, Element Of Truth, Leave Alone The Empty Spaces, The Moon Is A Blind Eye, Bullets, The Same Deep Water As Me, 86 TVs, Days Go By, Leave No Traces, Time's Arrow, The Ocean, before a solo set of Mouth On Me, From Your Favourite Sky, Bigger Wheels, At The Sea, Fingerprints, Astray and Meet Me At The Station and then the band return for Sat Beneath The Lightning Tree, Who Is Anybody?, Proof, To The Brink, I Am The Sky, Stepping Stones, Corporation and Northern Skies