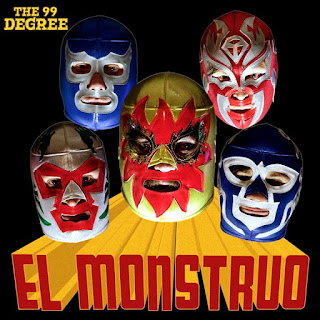 The 99 Degree have a busy weekend ahead, releasing their new mini-album EL MONSTRUO as well as playing a headline date at Retro Bar on Saturday. We caught up with guitarist Phil Turner about the songs on it, the simple yet striking video for recent single Flatline, how they got their name and their plans for 2020.

Could you introduce The 99 Degree please?

Sure thing. The 99 Degree are Paul, Craig, Stu, Joe and Phil! Two from Manchester, one from Rochdale and two from Burnley. We write and play all our own songs. That gives it a good wholesome almost Monkeys-like vibe I think. Which is probably where that vibe ends.

Where did the name come from, is there any significance to the number 99?

No significance with the number as such. The name came from reading a book about Robert Johnson. Referring to the line in Stop Breaking Down Blues "I gave my baby the ninety-nine degree". The book said 'the ninety-nine degree' was 1930's slang for something to do with either drugs or sex.

You’ve just released a new single Flatline. Could you tell us a little about how the song came about and what it’s about?

The music started out with me playing rockabilly stuff at home and became what it is now pretty quickly. Probably within an hour or so. It got sent as a bare structure to Joe to do his thing lyrically. It's about, let's say male failure, I'm gonna keep it deliciously vague. We all put a lot into it in the studio but it's not changed that much from the original idea. There's more parts on it, especially vocals and guitars, than you'd notice. It's operating on a fairly subliminal level and I can't remember if that was deliberate or not.

The video is interesting, with the five of you wearing masks and one by one revealing your faces. It’s very simple yet visually striking. Is there some deep meaning behind doing that or was it just an idea that someone came up with that worked?

Well, we knew we wanted a one shot thing about us rather than a story and we knew we wanted to take the piss out of something else, which I'll leave out there to guess. The masks being removed is partly symbolic I suppose. Mexican wrestlers get de-masked at the end of their career so we thought it'd be a good nod to shedding ego and casting off other people's perception of us, which ties in with some themes within the song and probably how we feel as a band about things. Also just liked the idea of doing it really!

It comes from an EP called El Monstruo that’s coming out this month (acc to fb?). Could you tell us about the other tracks on it please?

Certainly. Firstly, EL MONSTRUO is out on 9th November on Sour Grapes Records. It was recorded at The Warren Studios which was previously Fat White Family's Champzone studio over in Sheffield. Produced by Jack Howorth who worked as an engineer on their Serfs Up! album. Jack and Stephen Harrison now own the studio after FWF went back to London.

Jack was great because he wanted to work with us and completely got what we want as we're coming from the same place about a lot of things. He encouraged the sort of no commercial potential end we're interested in and pushed the extremity of it all! There was no saying no to stuff.

John The Killer is about those characters in films, especially in the 80's, the local bully/lunatic with everyone running scared of them. They're usually an outsider themselves but with a couple of stooges. It probably has alternative meanings too. No significance in the name though. I just wanted a fairly ordinary name! Although my brother's middle name is John. So it could originally have been him. It's something I've had around for a while so I don't remember. Music wise I don't know what it is! We tried to make it sound like nothing influenced it and kept saying "what about this?". Maybe early Beefheart rhythms? Maybe not.

Flatline as we said is a celebration of male failure. Set to a moronic beat! The band mantra of "play worse" came up a lot I think. And will continue to. Actually it's probably "play worse, better".

Young Flame actually had an odd start. I was playing guitar with a hangover along to a number in a 1930's musical that was on TV in a different room. It's not in there anymore really as it ended up the basis for the rhythm that became just the drums and I changed everything else around that. It got reworked again before recording to add some extra thump in the guitars. Lyrically it's Joe's optimism about a potential romantic encounter that was doomed from the get go. Naturally.

Dead Or Alive is a reworking of an old song of ours that we didn't feel we'd done right as a demo a few years back. It's in the Spaghetti-Western tradition of no good guys and just progressively worse characters by degrees. I always wanted a trumpet part in the second half and had been pestering Stu to do it live for ages. So now he's in the band permanently, he did it. And it was perfect from the start! There are a lot of parts on this recording too. A lot of guitar with no real lead guitar. Egalitarian guitar.

Young Flame (Reprise) is the flip side of Young Flame. Love's young dream gone wrong before it even began. Musically just tried to make it sound as psychopathic as possible really. And me and Joe went over the words again just before the recording to make it extra nasty. Really reflect that bitterness!

You’re releasing it on cassette as well as download. What made you choose that format?

We're working on the release with Sour Grapes Records who do tape releases. The tape thing is really to do with the DIY ethic both us and they have. It seems a much more punk thing to do than vinyl. Tape sales are on the up too! People like something physical I think when most things now aren't. With the bonus of a download with the tape too it's the best of both worlds anyway I suppose. We might do CD too and vinyl if there's a want for it.

It’s your second EP so far rather than release single tracks. Do you think there’s something about your music that lends itself to a collection of songs rather than individually released tracks?

Maybe. We do try and theme the releases. This one especially we've tried to run a thread through it and the theme runs deep in a number of ways for us which is why we've called it a mini-album rather than EP. We did release a Double A-side single 'Love (Like I Need You)/Bed Of Bones' earlier in the year too though so it's not that we're against doing that way. Personally I just prefer more output from a band. It's a snapshot of where you're at and hopefully gives more of your character. You don't really get that from one song at a time. And also I like the struggle and conflict that comes with getting more done at once as a group over a short period of time. And bands should want more out too. It's what we do.

You’ve got a big headline show at Retro on Saturday with The Maitlands and Deh Yey. What can people expect from the set?

We will do our thing, we're a much more powerful and balanced spectacle now with five members. Hopefully the musicianship, that we do surprisingly have, comes through more now. We've worked and reworked everything so if you've not seen us for a while, you should! And the other people on the bill are great, we've put a night that we want together is the main thing. We've put people on that we like and would have liked to put on more. There's a lot of good bands in Manchester now rather than the old guard of Oasis and Joy Division knock offs. Manchester has REALLY wanted nostalgia in it's music for a long time. I think we're finally out of a near thirty year funk in the city musically. Let's not go back to parkas and bucket hats please. The Stone Roses were good. Past tense. Oasis were largely always shit. Let's do something new.

What are your plans for 2020 - any specifics goals or ambitions?

We're hoping to continue to promote EL MONSTRUO for a while. We think we've finally made something we always wanted to make. It sounds like what we always intended to sound like and we know how we did it, so it can happen again! So probably back in the studio again at some point. There's loads of songs in the pipeline. Hopefully play some places further south too. Maybe festivals again after Kendal Calling this year.

If you had to describe The 99 Degree to someone who’d never heard you, where would you start?

I'm going to say we're kind of post proto-punk! At the moment we're quite dark with blues, surf, rockabilly maybe some Eastern European folk in there. It's music coming from an outsider perspective I suppose rather than being part of something bigger or making an attempt to be involved. There's a lot of blues actually although we try to stop it short of sounding like it. It's more the kind of crossover period, Freddie King stuff. Before It went psychedelic and was ultimately crushed by Eric Clapton's rolled up suit jacket sleeves.

We'll try to throw in anything we like and there's parts of the band that listen to the odder stuff and some less so. And we're trying to make that mix into listenable songs. So bear with us.

Tickets for their Manchester Retro show are available here.

Email ThisBlogThis!Share to TwitterShare to FacebookShare to Pinterest
Labels: The 99 Degree