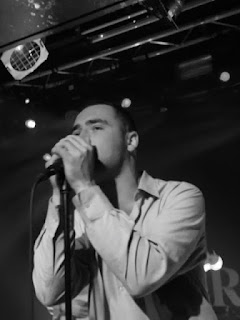 We were in the Swiss capital of Bern on a wet and freezing cold Sunday night to watch the most important band in the world right now complete their month-long hectic European tour in style.

The Murder Capital’s relentlessly hectic schedule came to a heady climax with their final, exhilarating, show of an epic tour that has extended the length and breadth of the UK and Europe promoting the magnificent When I Have Fears album.

Grief, a common theme within the album, can be relentless too and this explains why the band consistently maintain such high intensity performing to old and new audiences thus breaking down barriers and creating the tightest of bonds built on fear, hope, strength, trust and love.

Tonight, as always, they play like their lives depend on it. It’s what they do. Feelings, avoided by others, tackled head on as they lay their souls bare. They confront, they cry, yet they make you feel alive. They are brothers embracing the brothers and sisters in attendance creating one big family with a spirit of friendship...and love.

It can be best described as a cathartic experience watching this band. Their music leaves us in a purgative state. It keeps us all together, and this movement, it feels like a movement, is taking us on a musical journey from the depths of despair to the highest of highs. From the searing end into the abyss, from a world that can suffocate you as you feel the four walls closing in, to celebrating life itself.

Those that know, know. Never has a band had such an impact on myself, or others I speak to, as The Murder Capital. The first time I heard them my heart stood still. It still does. There is a deep understanding collectively between band and audience. Comparisons to other iconic bands can be cheap and lazy as this band are very much their own thing. When they speak you listen. They matter. Their words matter. 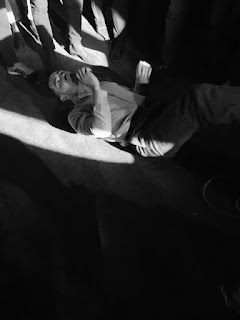 The album and the live show are full of darkness and light. There’s a spirit to them that suggests this band are just starting out on a path where greater things are to come and their sound simply can’t be contained by the smaller venues for much longer.

As the band take to the stage there’s an air of anticipation that only accompanies the great bands as their live reputation has spread as far as the Swiss capital. James arrives last. Surveying the crowd before we are coaxed and cajoled into a Slow Dance on the dark. The sombre mood captured perfectly. We stand, in silence. There are no illusions as the atmospheric overtones take control and people submerge into the depths of their own oceans letting it all wash over their heads before the instrumental twist and turns, ebbs and flows, engulfing us only like a cruel ocean can. There are turbulent strains emitted from the guitars and the drums, wave after wave, crash against the wall of people as it feels like there’s a storm erupting and waiting to cause devastation.

On Twisted Ground is simply devastating. James has one request. Put our phones away for this one song. Usually this beautiful song seems to pass too quickly. Tonight it feels like it goes on forever. You can feel people aching and breaking in the hushed room. A band of brothers, and sisters, united in grief. Everyone, everything, appears dark and gaunt as Gabriel’s bass gently guides us on the most emotional of journeys. For a brief second I open my eyes and I see James, vulnerable, and I let out tears. The song simply provokes and moves us all and it’s hard not to feel the despair, the hope, the inevitability of it all. It’s still raw and feels like a horrid dream where many of us have been yet this is no dream. This is real. Death overcoming life. The breathing gets heavier and those final gasps into the mic from James are enough to send shivers down the spine as the song takes us to a searing end. Sung from the heart...by a broken heart.

My heart, other hearts, stand still. People embrace, love conquers all. Love, Love, Love. As the song builds and the storm begets the eye we find time to cry as we say our goodbyes. There’s a sense of belonging amongst the crowd people confront the exits and entrances in their own lives. The comings and goings in life all encapsulated through the music of these five remarkable young men who are providing the backdrop to people being able to tackle their emotions head on as well as to let their minds run riot too.

As James tells us it’s the last night of the tour and it’s been “fucking wild” someone from the audience shouts “out of control!”. James quips “I’ve never been in control” and with that they launch into the anthem that is Green and Blue. With the squalling guitars we are afforded the luxury of going into a state inside of thought and wandering mind. If ever there was a song that got into your mind it is this one. It feels no different tonight. It sounds huge. Diarmuid’s majestic drumming dictating everything. Damien, Gabriel and Cathal putting everything into it as the band feed off each other and the crowd. James twitches, jerks and gesticulates before relaxing as the amber sisters twist and whine. Just when you think the song is coming to a crashing end the outro builds up again...and again. Taking us higher and higher until it reaches a shuddering halt as the building begs for mercy from the apocalyptic sonic assault.

Delusion lines the walls, the ceiling and the floor. For those in attendance this means everything. For everything. James puts everything into slamming the tambourine into the palm of his hand, no doubt inflicting more damage on it yet it is he that has the audience in the palm of his hand. “For everything, for nothing” refrains James in time to Diarmuid’s beat as the audience clap in time but it’s not long before it’s the crowd that are bellowing those words back. You can sense this song building to an almighty crescendo as the guitars are unleashed, poking and prodding us into a reaction. James continues his mantra until the juggernaut that is “Big D’s” drums brings another song to a crashing end. The abruptness of it all leaving us dazed, mournful and in shock. 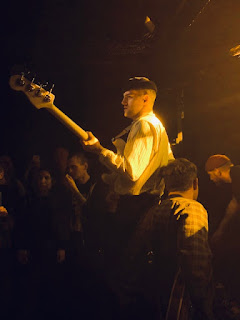 It’s at that moment the tide seems to turn on this performance. The abrupt ending of the song signifying the unexpected ending of life is greeted with James reminding us that we must celebrate life. What else are we supposed to do? Without further ado we dance and we cry...together. It’s a lot more fraught and frenetic down the front as a mass of bodies throw themselves about in jubilation, in exultation. The band mirror the chaos down the front bouncing off each other with such energy and fervour. It feels like a triumph, a joyous occasion, the perfect antidote to remembering those we’ve lost.

James demands more from us. The more they give, the more we give in return. He muses “If I gave you what you wanted, you’d never be full” but it doesn’t stop him giving more...and we love it. More is less. We give him more. He wants more. The masses punch the air and James returns the favour before joining us on the floor. The short, sharp, shock of a song pulling the audience in all directions as we struggle to keep in sync but this is The Murder Capital and this is what they do - they want us to connect and coalesce with others. Alone we can do so little but together we can do so much more.
So yet we flow together.

And this band kept us all together as they unleashed Feeling Fades. The last song, the last night of the tour and they go out with a bang. Cathal and Gabriel enter the fray of a lively mosh pit and before you know it James flings himself into the audience entrusting the crowd to keep him afloat. Held high above the heads there’s one last vociferous chant as every amount of emotion is released. As James clambers back to the stage he surveys the scene and the destruction he’s just caused. The general feeling of warmth and love exchanged between band and crowd evident for all to see. With that, and to deafening feedback and rapturous applause, the band depart the stage and into the cold Bern night to celebrate the end of this gruelling tour.

2020 will see The Murder Capital take their next giant leap of faith with huge tours in the UK, Europe and North America lined up. As the venues get bigger then so do the barriers they have to break down. Upward movement is essential for any artist. With every show they demand a focused and engaged audience so playing the bigger halls will offer new, exciting challenges for them meaning there’s no chance of it all becoming stagnant. Not resting on their laurels and with the band’s ability to unite through their music it’s evident the most important band in the world right now are already planning for their next challenge.