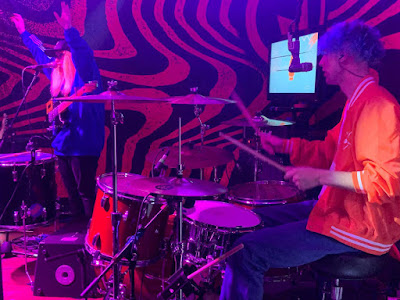 SKIES opened their tour in support of recent single Born Yesterday in the basement of Jimmy's in Manchester on Wednesday night with an energetic twelve-song set supported by Norwich's Lightscape.

You always have to admire a band that plays every gig like it's the biggest one they've ever done and Lightscape very much fall into that category. They struggle to fit on the compact Jimmy's stage so Will spends the show off stage in front of us, getting close to the front rows and creating a connection that serves them well throughout. They have a real ambition and energy to them that will serve them well in bigger venues than this - and a desire to mix their sound up throughout the set without deviating too far from their desire to deliver heavy riffs and songs that you can dance to as well as sing along too as a few of the front row did throughout. 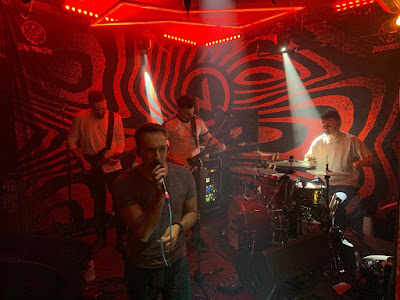 They describe previous single Running is described as rock samba, and while we don't quite get the description, it's got a big anthemic swagger to it without veering into cliche. You can tell they're leaving nothing behind by the time they finish with Live In Fear, such is the passion that they clearly have for their art. The Jimmy's crowd, to most of whom they were unknown at the start, warm to them and give them a very positive response two hundred or so miles from home.

SKIES have been around for a few years now and have built a twelve-song set where every one of them feels like it should have been their breakthrough single. Guitars, drums, dual vocals and backing tracks and accompanying visuals that give the songs an almighty lift are the order of the day - and they do it giving each song a personality and meaning of its own, but also have the SKIES DNA coursing through their veins. They're so infectiously catchy that even those stood waiting to be impressed are tapping their feet and nodding their heads as each song progresses.

They start with Born Yesterday and by the time they finish with early single Drone, they deliver what feels like a greatest hits set for a band that's not even reached the stage of recording their debut album. The songs deal with love, losing love, needing help and learning to be happy in your own skin and they are couched in this huge whirlwind of sound that lifts you up and makes you feel like everything is going to be alright. Disaster almost ensues when Jericho breaks a drum stick early on and then Alie breaks a string on her guitar, but they soldier on relentlessly through the set, encouraging audience participation as they go. 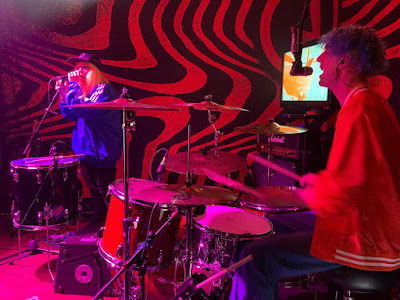 The magical thing about them is the unbridled joy that they have in their performance, at one point Jericho has been going at it full on and needs to pause for breath so Alie chides him for being old. But each song has an energy and a passion of its own as they move from Alie taking lead to sharing vocals, to her standing on a box above us to Jericho smashing merry hell out of his drums and somehow managing to sing at the same time. Hold On, Green, Afterwards and Pills all start at a hundred miles an hour and accelerate towards the listener who's unable to get out of the way and the collision is an exhilarating one.

SKIES might not be the most fashionable band around, they come from an area of the country (Kent) that's not famed for a fertile music scene and they don't go for big rock star posturing and posing, but what they possess is a charm and appeal that hooks you in once you've crossed their path and keeps you coming back for more. It's practically impossible not to love them as people by the end of the set, even if somehow the music doesn't bowl you over.