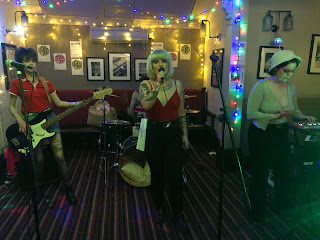 Friday night saw the latest instalment of Deco Records' residency at The Railway in Didsbury that brings alternative sounds to one of Manchester's more affluent suburbs. Headlined by The Red Stains, we also caught sets by Alex Rave And The Sceptical and Careering. 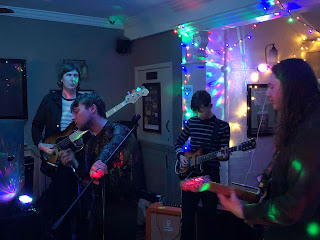 First up are Alex Rave And The Sceptical, a six-piece that trade in stories from the dark side of life, where money is tight, love is tough and joy needs to be embraced where you can find it. In Alex they have a front man with a voice to tell these stories and impart them with a poetic sense of pathos that perfectly captures their mood. The half-spoken half-sung vocals are set against a musical backdrop that touches on both psychedelia and the softer side of punk and the two combine to good effect to deliver a set that draws a crowd away from the bar area into the cosy stage setting at the back of the pub. 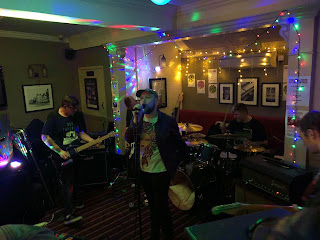 Next are Careering, a band that don't stand for any niceties. They're raw, aggressive and they're intent on getting their point across in their set - hundred mile an hour short sharp blasts of guitar-driven power that's probably too loud and too fierce for such a confined space. Songs spit venom out of every note, like an exoricsm of the anger that drives them yet it all manages to sound coherent, focused and targeted. They introduce a single as a track "that no one bought" as if they don't care, but what's very obvious is that Careering do care about their art. 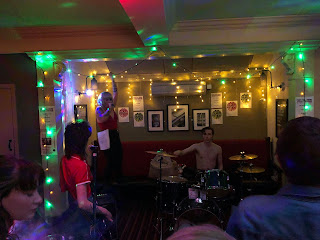 You already know The Red Stains are in the house. Every reference to this gig has been tagged by them in some way - in red. Natalie starts us off with the old Scottish booze-fuelled gig chant of "here we fucking go" before they launch into opening track Trolley Dolleys. It's chaotic, imperfect in so many ways that the sum of the imperfections make it feel perfect. Natalie doesn't just sing these songs, she lives them and you sense what comes out of her mouth has only come into her head a nanosecond before, especially when she does the big intro for a song before realising they're about to play another one. She gets away with it of course.

Musically, it's very skeletal, Ben's drums very primal in nature, Sterling's bass sharp and spindly and Ella's keyboards often feel like they're coming in from another song and finding their place and refusing to budge. Natalie ends up on the bench at the back during their bonkers brilliant cover of The Fall's Totally Wired, knocks off monitors and mic stands as she loses herself in the moment while Ella knocks her keyboards off the table they're perched precariously on.

Mannequin rails against being objectified by men interested in one thing, Freezer Jesus deals with addiction to shopping, Mother's Ruin tells of disappointing parents and rants at the male domination of the local music scene that they're trying to smash and Jump The Met bemoans Manchester's creaking transport system that lets us all down daily - real-life concerns set to song, delivered tongue very much firmly in cheek with an energy and rawness that's both natural and real.

You'll either really love The Red Stains or despise them with a passion - there is no middle ground - and they wouldn't have it any other way. But they're not going to go away so you better get used to them.

Email ThisBlogThis!Share to TwitterShare to FacebookShare to Pinterest
Labels: Alex Rave And The Sceptical, Careering, The Red Stains