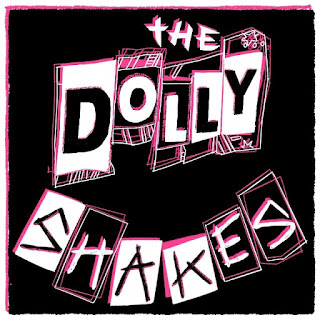 The Dolly Shakes approach to their art is very much a DIY one. Their debut EP, recorded in the bedroom of two of the band’s flat, comes with a handwritten thank you card and a photocopied lyric booklet.

The EP starts with a fifty second intro track that in real terms might be unnecessary but in the world of The Dolly Shakes is essential to setting the tone and spirit of the EP. I Never Agreed To Abide By Your By-Laws (On The Run) deals with the unusual subject of absconding to avoid unpaid overdue book fines - “I’ve got a bad habit and it’s getting me into trouble ... I’m on the run from the library” - and a refusal to kow to the digital world of the Kindle and self-service machines - “they don’t stamp the books anymore.”

All 5 Dances is about the character Dean Pelton from the US series Community and his obsession with fancy dress and throwing parties. He’s the “coolest guy on campus... but  we know he won’t notice us at all because he only has eyes for Jeff” as the song explodes into a storm of handclaps and “na na na” as they spell out his name. It’s unconventional, a lo-fi throwback but weirdly addictive.

I Wish Luna Lovegood Was My Friend is a tribute to the Harry Potter character that details all the coolest things about her - “she makes up the tune to the song she’s singing” - sung with conviction by Quina and a real warmth of affection.

Deep Fat Fryer is a modern day Romeo and Juliet or Bonnie and Clyde story. Two young lovers run away and turn to a life of crime, robbery and murder that ends in tragedy as Quina breathlessly tells the story as the music provides the dramatic background. There’s a sense of sadness though in the chorus where their real motives are revealed - “she just wanted to find someone who was real and he just wanted to feel how it feels to feel.”

I Want My Pink Shirt Back is a rant at a friend who is self-centred and only out for themselves - “calling all the other girls names, lying, cheating, making everyone cry” - that ends in the forgiveness of “you can sit with us” after Quina ponders whether she can take revenge and decides it’s not in her.

Meal For Two concludes the EP with a ukulele driven track about wanting to go the movies and have fast food as a major step forward in a relationship. It’s sweet and quirky, the sort of song you’ll love for its coy awkwardness or hate for its blatant disregard for what anyone thinks of it.

The Dolly Shakes is a triumph because it’s a set of songs that reflects the working of the minds of its creators - taking part inside their heads rather than on an exterior where people worry about the opinions of others. Musically it’s a little imperfect because of the nature of bedroom recording but that simply makes it feel more real and authentic and adds to the impact rather than detracting from it.  It’s refreshing for a new band to produce a debut that cares little for the cool school of thought and to live in their own world.

Email ThisBlogThis!Share to TwitterShare to FacebookShare to Pinterest
Labels: The Dolly Shakes