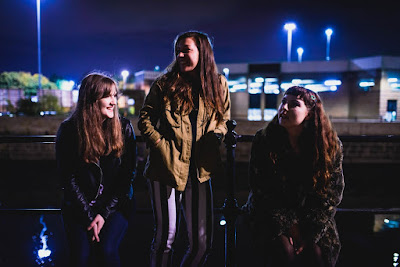 Lunar Sounds returned recently with their new single Reputation, the follow-up to last year's The Void EP. We caught up with them to find out more about how they got together, their unusual live set-up, the message in their songs and their plans for the future.

Hi. Could you introduce Lunar Sounds please and tell us a little about how you got together?

Anna: We're Anna, Chesca and Caris. We met on the internet in late 2017, but we didn't start the band properly until a few months later once we were all friends.

Where did you get the idea for the name from?

Caris: We can't remember - just felt right at the time!

When you play live, one of the most immediately noticeable things is that you swap instruments regularly throughout the set. How did that come about?

Chesca: We all play a bit of everything, and we're all indecisive and don't like settling for one thing.

Do you find it restricts you in any way when you're picking a setlist?

Anna: It is another factor to think about.

Caris: It kind of provides a structure to the setlist because we try to avoid swapping back and forth too many times in one gig, but it's doesn't really feel restrictive, we just make it work for us.

In a similar vein, do you write songs together or does one of you bring an idea or a full song to the others to work on?

Anna: It's a bit of everything, there's no one formula.

Caris: Yeah literally every track had a different process in how it was written - I think on the whole it's just really collaborative.

Your mantra on your Facebook page says "Promoting Self love and empowerment to anyone with a face" - how important do you think it is that music does that for people rather than being simply a form of entertainment?

Chesca: It depends if it matters to you as a listener, but if it does matter to you then it's important. As a songwriter it's very important to me. I think to share your thoughts through music with other people makes them easier to process, and then it helps people learn about themselves and reflect. It's like therapy!

It's a theme that appears in your latest single Reputation.  Could you tell us about what inspired the song's lyrics?

Chesca: It's a look at how men view women, and how they can treat women as disposable - especially with dating app swipe culture. There's an expectation for us to be a specific way and you start to measure your self worth based on how attractive other people find you, but it's all superficial.

You released your debut EP The Void a year ago - were you surprised by the amount of positive reaction it received for a first release?

Anna: Yes! I mixed it and it was my first project in a long time, so it was daunting to put out into the world. I was pleasantly surprised with the feedback.

Caris: We were all hanging out the night it was gonna go live on streaming sites, and we definitely had a moment of "oh my god, what if it's shit?". It was just nerves - we knew the songs were good, but it was definitely nice to get that reassurance from people other than our mates!

You're part of what looks from the outside like a vibrant Leeds scene. Is that the case and are there any other Leeds bands you can recommend?

Leeds has a great music scene - some of the bands we love are Roaker, Fig by Four, Z Gulls, Venus, Green Gardens, ZoZo. Too many to list them all!

Chesca: And we wanna go on tour!

How would you describe Lunar Sounds to anyone who hasn't heard you before?

Anna: I'd say we're energetic and a little bit punky.

Caris: Yeah we're a bit punk, but we also all love pop music, so we have a bit of a pop sensibility too - we try and make music you can dance to.

Chesca: For me it's all about pushing performance to the max.

Their EP can be bought from here - and read our review of it here.