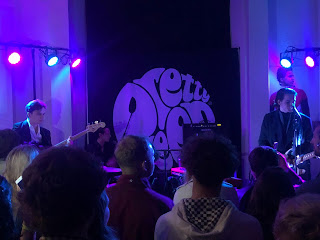 The Blinders played an intimate early evening stripped down set at Pretty Green's Manchester store to a crowd of competition winners and guests - revealing some of the songs they've just finished recording as part of their second album as well as some old favourites.

This feels "more real" Tom tells us half way through the set. He's referring to the fact that he can see us all, feet away from him, without the protection of house lights, a pit and stage costumes. For a band whose live show is so intense and powerful it's a big challenge as all that is removed and you can see the whites of their eyes - well you can if you can see over the sea of heads and raised cameras capturing a moment.

They start with three songs from their debut Columbia, opening with L'Etat C'est Moi, the anger of the song channelled with keys replacing guitars, Charlie's bass and Matty's drums more subdued, but no less impactful. It's a test of songwriting quality and the band's musicianship if they can take their full power songs and translate them in this way - and The Blinders pass with flying colours. The Ballad Of Winston Smith, replete with its 1984 references, feels even more eerie and menacing in these unusual surroundings, assisted by the excellent sound system that Pretty Green have brought in for the evening. Where No Man Comes has a similar effect, Tom having moved to guitar at this point, Charlie's bass line even sharper and more cutting. 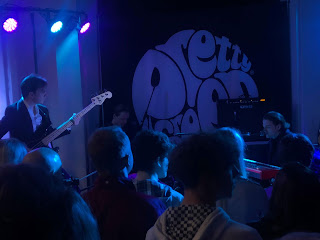 I Want Gold is the first of three new songs and hints at a more expansive and less confrontational record than its predecessor even considering the circumstances of the show. As the song progresses Tom loses himself in it, as if transported to a different time and place. Brave New World has a real tension running through it once you slow it down - the "ooh aah it's a brave new world" line has you looking around to see who's coming for you whilst I Can't Breathe Blues feels even more claustrophobic.

They finish their planned set with two more new ones, both with Tom on keyboards again. Whilst some of the guests at the back had become restless and decided their conversation was more important, the rest of the crowd listened attentively to Something Wicked and Circle Song, the latter described by Tom as the "best thing we've ever written." They might not possess the immediacy of Columbia, but they very definitely point to their second album being a richer and deeper record and Tom's description might not be too far wide of the mark. That should be that, but the audience down the front seem unwilling to let them leave - so they conclude the night with Columbia's final track Orbit (Salmon Of Alaska) before heading to answer questions from Pretty Green's host.