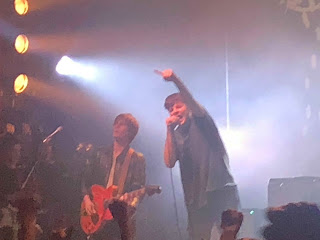 Fontaines D.C. kicked off their sold-out UK tour at Manchester Ritz on Tuesday night, a show that sold out six months in advance on the back of their debut album Dogrel which is sure to top many of the end of year lists and had touts outside desperately scrabbling for any rare spare tickets that might appear.

It's been a meteoric rise for Fontaines D.C. in the past twelve months - just eleven months ago they sold out the 80 capacity Eagle Inn and upgraded to Night People, just round the corner from here, a venue with a capacity less than a tenth of this one. They sold out Gorilla almost immediately and then this room before embarking on a year full of touring that has taken its toll at times, but tonight it feels like they're fresh, revitalised and ready off the back of a successful European tour to cement their place in the upper echelons of the UK live scene.

That sort of rise brings problems of its own; spiralling expectations, playing shows with just one album and not much else under your belt places constraints on set choice and length and whilst you're still finding your feet in the business you're expected to blow away fifteen hundred people, at least half of whom (based on the step-up from Gorilla) have never seen you before.

The heaving masses as they charge through Dogrel leaving sweating jumping bodies in their wake tells its own story as to how successful they've managed to surmount those challenges. There's an additional one in that the Ritz's sound is very muddy and takes off the razor sharp edges of some of the songs, particularly the slower ones (Dublin City Sky suffers more than the rest). But still they send everyone out into the cold night air buzzing, fresh from either bouncing around or punching their fists to the likes of Boys In The Better Land, Sha Sha Sha and Too Real 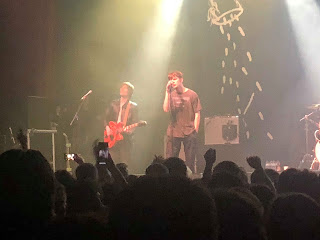 It's impossible to shift your gaze from Grian all night. He's on edge the whole time, prowling the stage, saying little other than a thank you at the end, but waving at people in the audience, psyching himself up between verses for the next one and delivering the quickfire words of these songs with an accented half-sung half-spoken voice that gives them added gravitas. They're less visual than some of their contemporaries and the sombre simple lighting reflects that too; the rest of the band are less demonstrative and let their playing do their talking, but no one in the venue seems to mind a bit.

They finish with Big, an almighty two minute fuck you to those who've doubted them and put them down in their past, whether it be the childhood that was small or their first steps as a band; those that felt their curve was too steep and they'd crash and burn. Fifteen hundred people declaring with them that "I'm gonna be big" is a clear statement that they're only going up and up.